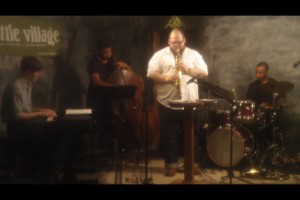 “Groove Theory is a contemporary jazz ensemble from modest beginnings in the small college town of Iowa City, IA. Dedicated to original compositions, Groove Theory has placed a strong emphasis on performing original compositions written by all members of the ensemble”… “The members of Groove Theory have been highly successful as individual performers, and have performed with many reputable jazz artists. This young ensemble brings a soulful and virtuosic flavor to jazz music, and continues to forge new pathways for contemporary jazz performance. Groove Theory’s second album Ever Onward (featuring the compositions of saxophonist Nathan Bogert) is soon to be released, and offers an opportunity for listeners to experience another element of Groove Theory’s musical aesthetic.”

Little Village Live is free to attend and is broadcast live over KRUI Radio (89.7) weekly on Wednesdays at 5pm at Public Space One in the basement of the Jefferson Building in Iowa City.