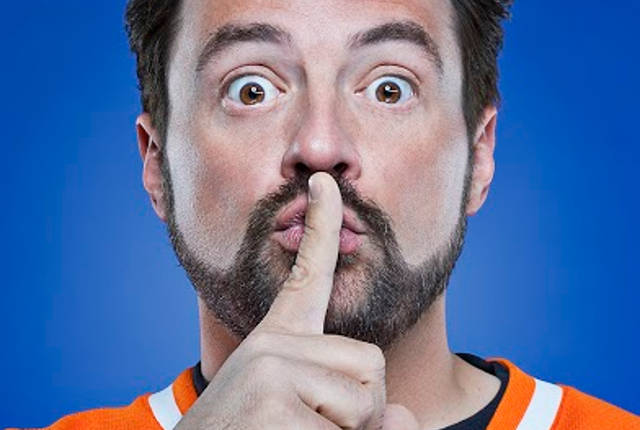 Update: This story has been updated to include the show at The Englert Theater, which was announced after the original version of the story was published.

Filmmaker Kevin Smith is returning to Iowa in April. Smith and comedian Ralph Garmin will be recording their podcast Hollywood Babble-on at Codfish Hollow Barnstormers in Maquoketa on Saturday, April 28, and at The Englert Theater in Iowa City on the next night.

Smith and Garman launched Hollywood Babble-on, which discusses current events in entertainment, in 2010. The podcast features regular segments like “Movies that will Suck,” “What strain is Kevin smoking?” and “Geek news.”

Even though the show also features segments like “Kevin Smith: Butthole judge” and “How big is Liam Neeson’s cock?” Codfish Hollow lists the show as “all ages” event. Tickets are $30-$35.

Tickets for The Englert show are $36.50-$56.50. The Englert doesn’t take a position on whether Hollywood Babble-on is an all-ages show, but notes on its site that Smith and Garman are “just two nice East Coast boys… who happen to have a heavy dependence on drugs and alcohol, respectively.”

Smith, at least, has resolved to live a healthier lifestyle these days. He suffered a massive heart attack on Feb. 27, after the first of two scheduled stand-up sets he was performing at a comedy club in Glendale, California. Smith tweeted about it a few hours after being admitted to hospital for treatment.

After the first show this evening, I had a massive heart attack. The Doctor who saved my life told me I had 100% blockage of my LAD artery (aka “the Widow-Maker”). If I hadn’t canceled show 2 to go to the hospital, I would’ve died tonight. But for now, I’m still above ground! pic.twitter.com/M5gSnW9E5h

Two days later, Smith tweeted he was home, feeling better and is now a vegetarian.

Both shows starts at 7 p.m. Audience members will be the first to learn if Smith and Garman decide to include either Maquoketa or the somewhat repetitively named Iowa City, Iowa in one of Hollywood Babble-on’s regular segments, “Your town’s got a fucked up name.”