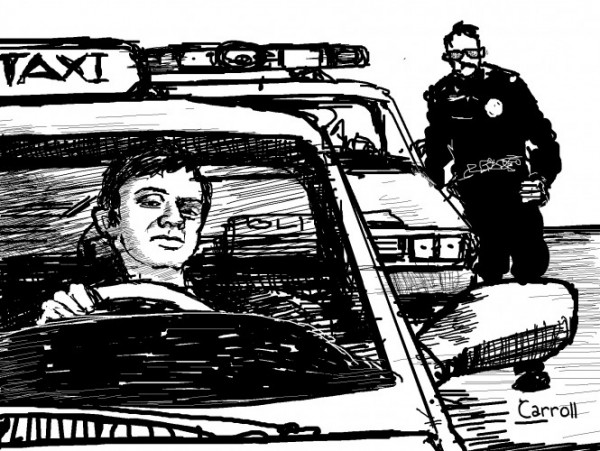 This is the craziest thing that ever happened in my taxi.

One day, many years ago, I got to work and scored an airport run right off the bat. Better yet, it was a package delivery out of a medical lab so pay was guaranteed. Plus, boxes always make decent passengers.

I was in the yard prepping the taxi when my friend P. snuck on me. God love her, P. had a crank habit and her bills were suffering. I-Wireless had cut her phone off and she needed it for work, so I’d thrown in the money to get her phone back. Today she wanted to repay me.

“It ain’t cash but it’s green,” she chirped, slipping me a cigarette cellophane pouched with marijuana. It was sort of green but looked like burrs you’d pull off your socks.

With the delivery run leaving me no time to make a drop at home, I rolled to the lab, picked up the package and hit the road north. But I disliked carrying grass in the taxi. So I chuffed as much of the evidence as I could until it gave me headache and the remainder I stashed in my hip-pouch.

The box, meanwhile, said not a word.

When I reached the airport, an apparent disaster was underway. The highway was closed for a mile to both sides of the airport’s access road and cop cruisers were parked catawampus in the shoulders. This was in October, a couple of years after 9/11. From a rooftop in Brooklyn I’d watched the second plane come in and two years later I was still pretty wazzed out. My mind raced wondering what the hell was wrong now. Suddenly from the airport rushed a motorcade of gleaming black Suburbans and escort cars. These exited the access road and boomed north on Edgewood. Cruisers scrambled to join the parade.

The highway opened thereafter and I drove to the access road, which is how you get to FedEx. This is when I noticed men in suits roving the grounds. I saw others posted on the roof of the FedEx warehouse. They looked like snipers. My taxi whined to a halt at a police cruiser blocking the road, out of which leapt a serious dude. He wore a suit and a red tie, sunglasses, the earbud and haircut, and somewhere under the coat he kept a hefty sidearm.

It was then I’d realized the ashtray was open with the roach showing in its teeth. I was busy jamming it shut when the suit announced, “United States Secret Service! Stay in your car! We’re on lockdown!”

There was no turning back. “But I got to get to FedEx. It’s a medical delivery. Look—it’s human eyeballs.”

My heart was pounding but I wasn’t screwing around. I eagerly showed him the package. A bright orange sticker slapped on the box showed the drawing of an eyeball: CONTAINS HUMAN ORGANS/PLEASE RUSH.

He stared at me and at the box and then waved at the cruiser. Now the cop came jangling with the handcuffs. The agent checked my license and taxi badge, and he pulled the lading papers and saw the eyeballs were shipping from the eye bank to a university in Texas.

Were they going to check everywhere? My eyes clapped on the ashtray as the cop brought out from his side a telescoping mirror which he used to peep the undercarriage.

The agent spoke to me, his hand snaking through the window to unzip and search my hip-sack, “So do you live in Iowa City? Are you a student? How long have you driven a cab? I bet you see some wild things.”

“None wilder than this, sir! What’s all going on here?”

I would later learn Dick Cheney had just landed on Air Force Two and that this routine was standard protocol. But I sweated a river standing half through a jumping jack as the agent patted me down. As my luck further had it, I was wearing that HOMELAND SECURITY shirt—you know, the one that shows four of my indigenous kinfolk carrying long-guns, FIGHTING TERRORISM SINCE 1492.

The cop glanced at the taxi’s interior and gave his thumbs-up. But the agent wanted another look in my purse. As advertised, the hip-sack had two “stash” pockets. I kept one filled with quarters and I’d stuffed the ditchweed in the other. Special Agent found the quarters first.

This was going to end badly. I’d be arrested by Secret Service and lose my job and make national news all at once. I could imagine the scene as it was viewed from the perimeter through a fence, “In related news, a taxi driver was arrested at the airport on drug charges….” And for fucking ditchweed, no less. But then I felt the agent tugging the zippers closed over both stash pockets.

I flopped back in the taxi and my hands shook as I steered past the roadblock. Why did he let me go? I didn’t want to know.

I made the delivery without note and rushed for the exit. It was then I saw another suit running through the trees, hustling to keep pace and barking in his radio. At the roadblock my agent just waved me through, grinning at me like a cat. So I continued my egress. But a county cruiser pulled me over soon as I hit the public roadway and I saw the sky turn red. It hit me then: The agent had let me go because Secret Service got to do its job and I got to do mine. Now Linn County was going to do its job too.

The deputy, to my surprise, was full of apologies.

“I’ve just been informed you had clearance, sir. You are free to go and to have a good day!”

Vic Pasternak will unsuccessfully seek the Republican bid for President of the United States. Please write him in.