When I was in junior high and high school in the ‘70s (ulp!), there was kind of a dippy prose poem from the 1920s by Max Ehrmann called “Desiderata” making the rounds. It became somewhat popular after Leonard Nimoy made a spoken recording of it in 1967 (on the album Mr. Spock’s Music from Outer Space—I kid you not), and it really took off (number eight on the Billboard chart) when radio announcer Les Crane made a 45 rpm record (do you know what that is, kids?) of it and won a Grammy for his efforts. I confess to having a poster of the text on my bedroom wall. While the piece is a bit greeting-cardy, there’s much in it I really can’t disagree with. And that especially includes the first line: “Go quietly amid the noise and haste, and remember what peace there may be in silence.”

In late July, my family and I will make our way north on our annual trek to the Boundary Waters area of Minnesota. We rent a remote cabin with no electricity and running water. One of the things I most look forward to is the profound quiet of Sundew Pond. Gordon Hempton, an “acoustic ecologist,” has recorded natural sounds throughout the world and is interested especially in capturing sounds of nature that will no doubt become extinct as we continue to devastate the world. In his book One Square Inch of Silence: One Man’s Quest to Preserve Quiet (Free Press, 2009), Hempton tells us that “preserving natural silence is as necessary and essential as species preservation, habitat restoration, toxic waste cleanup, and carbon dioxide reduction.” 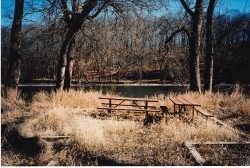 It’s important to note that Hempton does not define “silence” as the complete absence of sound but rather “the presence of everything.” In fact, “silence is a sound, many, many sounds.” But these are the sounds of the natural world—rain, wind, birds, flowing water.

This is the kind of quiet I relish at Sundew Pond—the erasure of the man-made sounds of vehicles, appliances, computers. Nothing restores me more than sitting quietly, unmolested by technology, listening to the northern winds sigh through the pine branches, the song of a white-throated sparrow, the honking of a merganser skimming across the water, the shuffling of a red squirrel in the duff of the forest floor. In late summer, when we will visit this year, the nights can in fact be eerily—and wonderfully—absent of sound. Our favorite time of year to visit Sundew Pond, actually, is the early summer, when the natural night silence can get quite loud with astonishing choruses of spring peepers and the trilling of American toads.

I often feel that I can never find true quiet here at home in Iowa City, whether it’s the unadulterated sounds of nature or just plain silence. In fact, I’d say Iowa City is actually a pretty noisy place. One of the first things I noticed about the town when I visited it for the first time 27 years ago (ouch!) was that there were an awful lot of cars driving around. I know we’re hardly the Chicago expressways, but traffic seemed both busy and widespread.

Of course, much of the “unquietness” of Iowa City is also part of its vibrant character that attracted me here in the first place. There’s a lot of busy-ness and activity here—and a lot of great activity. I especially love the cultural and intellectual ferment and fervor, the mark of a happening university and community, all giving birth to creativity and innovation. Music is playing, artists are painting and sculpting, smart people are lecturing and debating, writers are writing and giving readings, politically active folks are activating, thousands and thousands are learning—it’s all good, and it’s all who we are. I wouldn’t want to live anywhere else.

But all of this commotion—the good and not-so-good—can be stressful and exhausting. I find it hard to find sanctuary from both the liveliness and the flat-out noise of Iowa City. Occasional quiet is thrust on us momentarily in the paralysis of a snowstorm or the involuntary unplugging of a power outage. But otherwise there’s always a roar of traffic downtown or near the expressways or even near Scott Boulevard where I live on the relatively quiet far eastern reaches of town. A nice riverfront walk on the university campus is still accompanied by the constant growl of Riverside Drive. UIHC’s rescue copter chops through the still skies several times a day. And a solitary stroll is always interrupted by running into someone you know, which leads to a (yes, very nice and welcome) conversation about the latest book read or political outrage perpetrated.

I often love the sound and “noise” of Iowa City, but I often seek the silence it fails to give me. So I’d like to ask you—where do you find quiet sanctuary in Iowa City? Tell me, and I’ll share some ideas and favorite places in a future column. I won’t be quite as restrictive in my definition of “silence” as Gordon Hempton—frankly, the full-on “silence of nature” that he talks about simply does not exist within the environs of our community, let alone anywhere else where modern people live together. Being able to hear the voice of the natural world can be important. Inside quiet places are also okay. But I am definitely interested in places outside the self; quiet places can facilitate interior meditation and peace, but I can’t physically visit your mind and soul.

If you have an idea about where to go placidly amid the noise and haste, email me at thomaskdean@mchsi.com or, if you’re reading this online at littlevillagemag.com, leave me a message. If I get enough responses, I’ll share with you “The Quiet Guide to Iowa City” sometime soon.