A Twitter account soliciting confessions from Iowa high school students popped up on January 19. Within 24 hours, the account had published nearly 300 “confessions” and gained more than 5,000 followers. Some of these tweets used first names, and all were tagged with a purported high school of origin.

Welcome to High School in 2014, where the sort of graffiti you’d normally see etched in a bathroom stall is just as likely to wind up on Twitter and shared by an audience of thousands. Whether or not these confessions are actually legitimate (they probably aren’t) is beside the point. The fact that they’re nearly impossible to verify is just another example of how, for teenagers, the game has changed in the age of viral media.

The account features a lot of the typical teenage nonsense you might expect. Confused references to human anatomy, slut-shaming and the like. In a sense, it lends the account an air of authenticity, and subsequently, leads to a bit of squirming when the confessions head down a darker path. 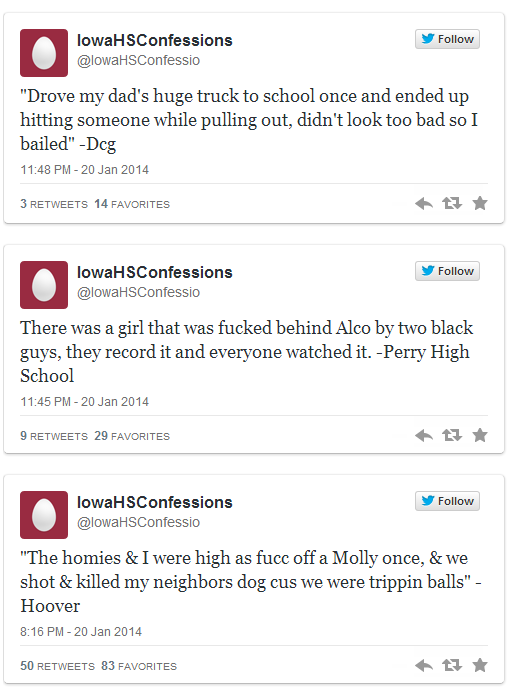 The confessions are submitted primarily through the anonymous question and answer service ask.fm, and there’s no way to verify any of these claims at face value. And the confessions roll in, published for a rapidly growing audience that, at certain points Monday evening, was growing by the hundreds with each passing hour.

Welcome to high school in 2014, where teenagers are still the worst and bathroom graffiti ain’t got shit on Twitter.