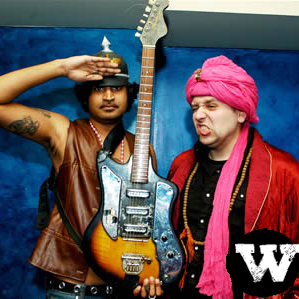 Hello and welcome to another edition of the Weekender. Another solid weekend awaits us. Here’s the scoop:

Spawned from ‘90s garage punk, the King Khan & BBQ Show have recently reunited. After a bitter breakup and falling out between members, the duo has been playing shows again since this past summer. In July, they played their first show as a reunited band to their rabid fan base, selling out a large concert hall in Toronto. The act consists of longtime bandmates/collaborators, King Khan and Mark Sultan (BBQ). The two have performed in various projects and under different names for nearly two decades and have released material on notable labels such as Crypt, Goner, In the Red and Fat Possum. They are able to produce a live sound that feels like much more than a two-piece act could possibly offer. They each play multiple instruments, often at the same time, and with unrelenting raw electricity.

One of New York City’s most established comedy clubs is the Upright Citizen’s Brigade Theatre. It’s an improv comedy club that features affordable, high quality performances, and has been an institution for many now-famous comedians (Robin Williams, Tina Fey, Conan O’Brien etc.). One of the things UCB does is send a troupe of improv comics around the country to perform in their “TourCo”. These are folks who are studying at one of the most acknowledged comedy theatres around. They know what they’re doing. It’s going to be funny.

The Hood Internet is a mashup duo from Chicago. For most of their career, The Hood Internet’s game has been mixing hip hop and indie songs, creating a unique dance vibe. Their most recent album, FEAT strays from their previous formula, and features original music featuring numerous contributing artists. I spoke with half of the duo, STV SLV on the phone a few weeks ago, so for more information, I will direct you here.

A sale of handmade gifts by local crafters.