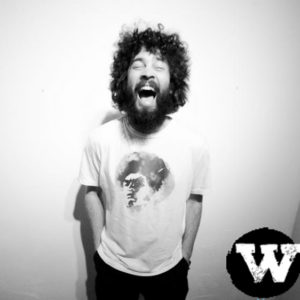 Welcome to another edition of the Weekender. In addition to our usual Thursday through Saturday coverage, I’ve extended the weekend by a few days in order to cover a super awesome Monday show. But let’s start with Thursday:

Rolling into Iowa City in a vegetable oil powered ambulance this evening is experimental bass composer, CJ Boyd. Boyd’s solo act is captivating. He builds his elaborate pieces by running his bass through various effects, delays and loops. Music is a full time job for CJ Boyd and he is constantly on the road. He’s been steadily touring the United States and Europe since 2008, rarely remaining in one place for more than a week or two. Joining Boyd will be Haunter and Mossbed.

Coolzey’s in town this weekend and is playing a show which will apparently be his only one in Iowa City all summer. If you’re not familiar, Coolzey is a native Iowan who has made a name for himself as a rapper. He blends elements of pop and rock into his music and his lyrics are smart, clever and quirky. Coolzey has released a whole bunch of music over the years and is currently working on a new record which is scheduled for release later this year via his own Public School Records. Opening up the show is local lady group, Muscle and rapper, Ion.

Champaign, Illinois band, The Divide released their debut EP back in January and are already back with another this month. The folk band’s latest self titled EP is tight and moves in a more full and polished direction. The band has played the Summer Camp music festival and has begun to generate some buzz around their song, “If I.” Have a listen for yourself below and check out their first, Attic EP available for free on their Bandcamp page. I suspect/hope we’ll be hearing more from these guys in the future.

Destroyer is the project of signer/songwriter, Dan Bejar. You may also know Bejar from his duties in the New Pornographers or his collaboration with members of Frog Eyes and Wolf Parade, Swan Lake. The Canadian band has consistently put out critically acclaimed records since the mid 90’s and their most recent release, Kaputt is no different, receiving Pitchfork’s “Best New Music.” Opening up for Destroyer is songwriter/producer, Sandro Perri. Perri’s latest, Impossible Spaces has been a success among critics and has been played heavily in my own personal rotation over the past few months.

Have a lovely Iowa City weekend.