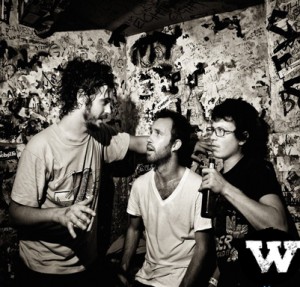 I can’t believe it’s already time for another Weekender. We are just cruising right through summer, aren’t we? I hope you all have been enjoying yourselves. Alright, enough small talk. Let’s do this.

Jennifer Hall is a Chicago based singer/songwriter. She can be loud or she can be soft and tender, but her delivery is always exceptionally passionate. She sites Edith Piaf, Patsy Cline and Ray Charles as major influences but aims to rework the sounds of yesteryear into a more modern sound. Hall and her backing band of close friends have made themselves a fixture of the Chicago music scene, either headlining the local clubs or opening for larger, national acts. Her debut release, In This was released last fall and she recorded a Daytrotter session just last week. Opening the show is the lovely and local Rachel Marie, who is now rocking some killer banjo.

White Denim was born when members of two different Texas bands (Parque Touch and Peach Train) decided to join forces. After some early lineup changes they pressed forward under their current name. The psychedelic garage group began making a heavy impression on the Austin music scene in the spring of 2006, and recorded their music in a Spartan trailer from the 1940s. With five full length studio albums currently under their belt, White Denim has achieved widespread critical acclaim. They hit the road opening for Wilco earlier this year and are touring heavily this summer. While on the summer show/festival circuit, they plan to write their next full length. White Denim is a band that pushes the boundaries of what “psych rock” can mean, and they after 6 solid years as a band, they are not slowing down.

The Bluebird After Dark series is a monthly showcase of Iowa comedians, and this month’s lineup is hot. The event is hosted by PATV’s Yale Cohn, and this week he’s brought in Colin Ryan, Tom Garland, Jake Vevera and Bruce Jay. All of these guys are seasoned in their practice of comedy, as the tongue-in-cheek Facebook event page explains:

Colin Ryan, who’s originally from Dublin, Ireland, but has been living in rural Iowa for two years now and has played throughout the state featuring for National acts like Josh Blue, Greg Warren, Scott Long and Mike McRae, and was also the winner of the Iowa Comedy Showdown competition in 2011.

The night following this show he is recording his first CD with Underground Comedy, at the House of Bricks in Des Moines, “Atheist by Grace of God”. His insightful act covers many issues, such as his unique perspective on life in Iowa, religion, politics and Fatherhood.

Tom Garland, whose unique act blends hip-hop and topical comedy with a dash of home-grown Iowa flavor. He’s worked world famous clubs such as Chicago’s Zanies Comedy Nightclub, opened sold-out shows with over 1,000 fans for B.J. Novak and Joel McHale, and was featured in Gilda Radner’s LaughFest 2012 in The Late Night Comedy Pros Showcase, solidifying him as “one of the country’s best young professional comics…” (TravelIowa.com)

Jake Vevera, who, in his own words, is “neither funny, charming, intellectual, good-looking, inspiring, wise, or charismatic, original. He is a worthless hack fuck and doesn’t deserve an ounce of your time or attention. But come see him anyway, because if you’re unsatisfied with the show, he might me convinced to jerk you off in the mens room to make up for his lack of talent. Either that, or you could just ask for your money back if he sucks at either one. Jake Vevera loves you!”

Seldom Seen is a two day music festival/camp out located on a farm about an hour Northeast of Iowa City. It’s essentially a laid back getaway to rural Iowa that showcases the fine music of statewide artists. It’s more than just a music festival though. This year they will feature a yoga class and provide cheap vegan/vegetarian dishes throughout the weekend. The fest is only in it’s second year, and for relying solely on the help of volunteers and personal donations, they’ve done a hell of a job putting together a full weekend of activities and performances. With no budget, this is a real testament to the power of organic collaboration in art and performance. Here’s the Friday lineup:

Day two of Seldom Seen begins much earlier with a yoga class at 10:00 AM, and features an extended music lineup, which goes as follows:

See you in August!