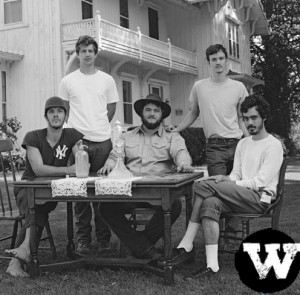 Hello and welcome to another edition of the Weekender. If it’s alright with you, I’m just going to jump right in. Here’s what’s going on in Iowa City this weekend:

It is refreshing to learn that The Felice Brothers is a band made up of three actual brothers. The bros were raised in Upstate New York, but all moved into a small Brooklyn apartment so they could perform their music in the subway stations. They are now joined onstage by a few friends, and tour the country with their folk-rock act. These guys have traveled the country with the likes of Bright Eyes, Justin Townes Earle and Old Crow Medicine Show. Their 2011 release Celebration Florida was put out on Fat Possum, though last year’s God Bless You, Amigo was self-released on their website. Physical copies were not even pressed. Opening up for The Felice Brothers will be Terrible, the new musical project of former Iowa Citian, Brian Johannesen (Grand Tetons). Johannesen now resides in Nashville where he met some like-minded, beer-drinkin’ folks to play music with.

Local weirdo psych-rockers, Techno-Lincoln and the Technicolor Union is putting on their annual FOONFEST this weekend. It’s a three day festival of mostly local performers at Public Space One. Each day has a packed lineup. Here is what Thursday looks like:

One of Iowa’s premier singer/songwriters, Pieta Brown will take the stage at CSPS Hall, joined by backing band The Sawdust Collective. The Sawdust collective features fellow Iowa music legend (and Brown’s husband), Bo Ramsey and Jon Penner. Daughter of established folk signer, Greg Brown, Pieta grew up in a very musical environment. As an added bonus to this show, Brown’s exhibit of photographs from the road will be opening this weekend as well. It’s called Boulevard & Wires, and features photographs used in the albums art of recent releases by Greg Brown and Pieta’s step-mom, Iris Dement.