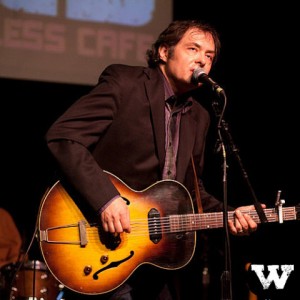 Hello there and welcome to this year’s final Weekender column. Many of us who skipped town for the holidays are back in Iowa City and ready to get out there again. This week features all musical events as other venues (Englert, Bijou, etc.) are still on a bit of a hiatus. We’ve got plenty of New Year’s Eve options for you this week, as well as some cool shows leading up to it. Let’s see 2011 off with a bang.

It’s always a treat when established bluesy Americana artists grace Iowa City with their musical presence. Over the past two decades, Kevin Gordon has made quite a name for himself. He has been compared to John Lee Hooker and his songs have been covered by the likes of Keith Richards, Levon Helm, Irma Thomas and others. Gordon is no stranger to Iowa City. Not only has he made the stop on previous tours, he lived here while studying poetry at the Writers’ Workshop. His poetic roots shine through in his lyrics and take his gritty folk rock jams to another level. With three full length albums under his belt, Gordon visits us in anticipation of his latest release in 7 years, Gloryland due out on valentine’s day.

Another former Iowa resident, Melanie Devaney will swing by for a set at the Java House this weekend. Hailing from Dubuque, Devaney now resides in Los Angeles where she writes and records some sweet, poppy folk rock tunes. Devaney cites images of nature as a major lyrical influence, but also sings about everyday life and anything that seems to be on her mind – anxieties of feeling lost in a new city, waiting for a letter from a loved one who is far away, frustrations about a seemingly endless war, etc.  Being surrounded by “stars” and actors is a theme in her songs, though in her song, “Actress” she makes sure we know, “I am not an actress these days.” There is an earnestness in her voice; she’s not trying to be anything she’s not which is something that I think often gets lost in much of modern music. Check out a live videos of  “Actress” below.

You will rarely hear local grindcore/metal heads, Cop Bar play a song over a minute and a half. Fronted by a screaming Sam Locke Ward, Cop Bar delivers spastic songs that will keep you moving. Try and keep up. Another local favorite, Lipstick Homicide is on the bill as well. Lipstick Homicide has a sound that could go toe to toe with your favorite 90s alt rock band – think Weezer, The Rentals, That Dog, etc. When I listen to the record, I hear exactly the type of band that I wanted to be in in high school, and it’s fantastic. Quirky Iowa hip-hopper, Coolzey hits us with some rhymes tonight too. Coolzey strikes that perfect balance between “white boy ironically rapping about white boy stuff” and some pretty serious production and lyrical flow. These three very different acts should make for a fabulously eclectic evening.

Kicking off our New Year’s Eve festivities this week is Cedar Rapids Celtic group, Wylde Nept. The band is scheduled to play traditional and original tunes for a few hours. It’s an early show because, after all, it’s midnight somewhere, right? At 6:00 p.m. CST that somewhere is Dublin, Ireland and Wylde Nept will ring in the Irish New Year with a toast. Check out this live video of “Nancy Whiskey” performed at the Mill a few years ago.

There’s not much more to be said about The Fez other than the fact that they are an excellent Steely Dan tribute band. Comprising of members of two other established local bands, Insectoid and Public Property, the tribute act strives to keep their versions of the songs as true to the originals as possible. Anyone who has seen the precise, elaborate act live would agree that the Steely Dan duo, Donald Fagen and Walter Becker, would be smiling upon them. Funky soul revivalists OSG open the show with a mix of cover songs and original tunes. For a night of suits, ties, backup singers/dancers and solid jams, this is the one to check out.

You’ve all likely seen or at least heard of psych rock band, Dead Larry. The former Iowa City band now resides in Minneapolis, but shows some love to their hometown to kick off the new year. These guys have developed a die hard following, so strong that their fans have earned the affectionate nickname, “The Family of Funky Friends.” Dead Larry has been using this momentum to tour the Midwest this winter in support of their new album, As The Radio. This show is also one of the last times you will get to see local funk-rockers, 5 in a Hand. The band will be moving some things around and re-emerging as The Thunder Foot early in the New Year. Their pals, Item 9 and the Mad Hatters open the show with some self-described “vintage rock” that promises to get your head bobbing.

I stumbled upon the Diplomats of Solid Sound by accident a few years ago. I was supposed to be meeting some folks at the front bar at The Mill, but soon found myself right in front of the stage in back for the remainder of their set. The band, complete with “Diplomettes,” has been compared to Booker T and James Brown and puts on a truly irresistible funk/soul show. They’ve taken their act all over the world and their songs have been used on television programs on MTV (“Made,” “My Super Sweet 16,” Punk’d,” The Osbournes”), VH1 (“Breaking Bonaduce”), A&E (“Sons of Hollywood”), HBO (“Cathouse”) and more. Iowa City is lucky to have Diplomats. Opening the show is Ben Driscoll of The East Side Motors.

A.C. mentioned in the last Weekender that he was stepping down from the column. Don’t worry though, you can catch him writing The Haps from here on out. My name is Steve and I am thrilled to be telling you what to do this weekend and hopefully for many weekends to come. Have a good one!