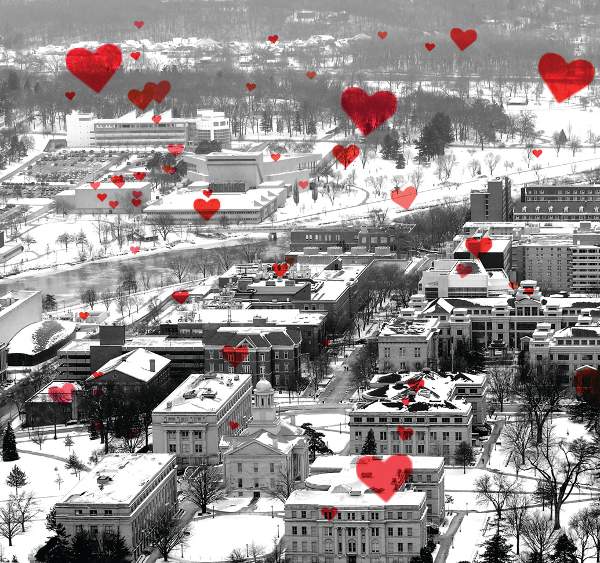 For some, a single visit to Iowa City means love at first sight. For others, seeing the beauty in this town takes a little more time.

In honor of issue number 100, three friends (including two long-term LV contributors) got together to talk about Iowa City, why they’re here, why they love it, and what it means to be living and working here.

Kembrew McLeod: I first moved here ten years ago, in 2000. I came from the East Coast and had no intention of staying in the middle of the country, but I changed my mind. I like this place in part because we are on the periphery, on the margins. That’s one of the big complaints about this town: We’re not a big city, and we don’t have the same cultural resources that “real” cities do, which is true. But what I like about us is that we’re underdogs; we’re a little scrappy. So in order for us to make things happen we have to do it ourselves, because we can’t just soak up the things that big cities have.

Andre Perry: I am also from the East Coast but I moved to Iowa City from San Francisco and I came for the grad program in nonfiction writing. Much like Kembrew I had this sense that I was going to be here for a few years, maybe become a better writer, maybe start working on a book project, then high-tail it back to San Francisco or get back to the East Coast and become a writer there. But there was something that just drew me in, almost immediately, when I got to town, which was just this idea that you could make fun, creative projects happen in Iowa City. Clearly you can do that in New York or San Francisco or any number of other cities but I’ve always liked being in that, as Kembrew said, underdog situation; working a little bit harder to get something.

KM: Iowa City is part of a Midwestern tradition that puts an emphasis on the arts, which, I think, partially has to do with the fact that Iowans are conscious of the fact that we’re in the middle of nowhere. It’s not like the arts, music, writing scenes just emerged from nowhere, for no reason. It’s because the city and its citizens have historically been invested in this idea of creating a cultural oasis.

Craig Eley: It’s worth noting that we’re having this conversation in the Englert, which itself was the project of a lot of people getting together to restore a beautiful, old theater and who have a commitment to the arts. The renovation happened here, what, ten years ago? This is one small example among many of people who care about getting together and literally reviving physical spaces to make artistic and cultural things happen.

KM: Yeah, it’s that combination of the community’s energy combined with institutions like the Iowa Arts Council, which I’m pretty sure did some sort of matching grant for this place. But a lot of the rest of that money came from benefit concerts to which musicians and other volunteers donated their time, which raised little pots of money that added up. That’s why the Englert was resurrected. I wanted to take this opportunity to give a shout out to state and city governments that fund the arts. When you think about the returns that you get from investing in the arts–compared to big infrastructure projects like a municipal aquarium or a rain forest–it’s a great deal.

AP: I think Iowa City is also interesting because there are palpable conflicts or tensions among the different artistic scenes or institutions that exist. Musicans, writers, visual artists, theater folks, and what have you–they don’t always hang out together. It’s as if they pick their own nights to be at the Foxhead or the Mill. I think there should be more crossover or maybe I’m just being hopeful.

CE: Yeah, there are some productive tensions.

AP: Right, people have these chips on their shoulders sometimes but then sometimes there will be a collaboration between two different scenes. You have people in town like Jared Fowler who’s in the grad music program and has made this concerted effort to bring musicians from the grad program together with some of the musicians in town who aren’t in the grad program to do the IHearIC project. So there are tensions but that’s also kind of cool because it’s not so copacetic here that everyone is just mellowed out and passive as if we were living in Fort Lauderdale. You have to work for the things you want, artistically and otherwise.

CE: When you’re in a town with that kind of vibe it also allows you to do your own thing. Isn’t there something about being in Iowa City that benefits your writing, for example?

AP: I don’t know if I can quantify it… it’s tough to get at that “thing” you’re talking about. I think in bigger cities people can spend time stressing about things that get in the way of their so-called work. Yes, there are also distractions here: it’s really easy to just leave your apartment to go see a show or–to be more frank about it–to go have some beers with a friend and watch a game at the bar; there’s a lot happening for such a small place. But there are other stresses in the cities. The financial stress of living in New York City is like a rabbit carrying around a dump-truck and if you’re an artist you might get caught up in the idea of maintaining some kind of image. Like, “Are those the jeans that Yeasayer likes to wear? No, not enough holes in the knees,” or, “Is that where Tao Lin gets his coffee? No, that’s Jon Foer’s cafe: twenty dollars for a double shot after 9 a.m.”

KM: In New York City, if you want to get from the Chelsea neighborhood in Manhattan to somewhere in Brooklyn, that’s a lot of time and energy. It could easily be an hour-long trek. In larger cities you feel like you’re almost battling just to get through the day. I am making that sound more dramatic than it really is, but comparatively speaking, Iowa City is less draining. It’s a fairly frictionless existence. What that means is you have more time to hang out with friends, watch a movie, go to a party, or see a concert. And you also have more time for your own creative work: writing, art, music, whatever. If you live in a big city like New York, you basically delete about three to four hours of your day just to get around. I also have a theory that, in New York, every time you walk through a doorway $20 disappears from your wallet.

CE: There seems to be something here that allows you more free time, more work time.

AP: And I think there’s more time to work on projects that don’t necessarily have to amount to some big end goal. In Iowa City you can meet someone and decide to make an ambient noise project that plays twice and that’s just it. The pressure is not on the end product; it’s in the process. When I went to school here I spent two years reading and writing experimental essays without ever feeling the pressure that I had to do anything else because essentially the people in my program were saying, “Hey, just take time and freak out and do what you need to do.” So I was given that opportunity which I might not have had elsewhere.