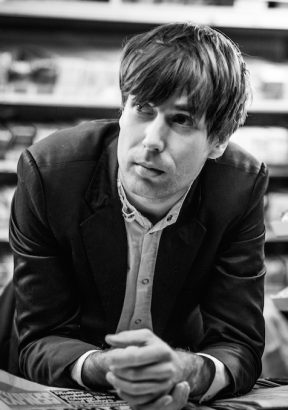 Canadian producer, composer and musician Nick “Diamonds” Thorburn has traveled down many musical paths. He started out by fronting indie garage rock band The Unicorns as a teenager before recording five studio albums and touring worldwide with the group Islands. From there, Thorburn scored the theme song and soundtrack for the incredibly successful true crime podcast “Serial,” and more recently, he reunited with The Unicorns to tour with Arcade Fire for a series of shows in 2014.

Thorburn took the time to talk with us about touring on his second solo album, City of Quartz. He plays Iowa City this Sunday at the Blue Moose Tap House.

How does the writing process differ for you, if at all, from writing in a band, to doing solo music, to writing scores for a podcast like “Serial”?

The process is pretty much the same for everything. You know, it all comes from the same place; just an idea that I’m inspired by or that I really like, everything stems from that. But, when I’m writing for “Serial,” it’s a little different because it’s instrumental and it’s a job. I have to write music to please someone else, there’s a client involved and I have to worry about if they’ll like it.

They came to me and asked me to do it and I just automatically accepted it.

You’ve made so much music over the years – in bands and on your own – do you have a favorite piece of work that you’re most proud of?

Will you just be playing songs from your solo albums at the Iowa City show? Do you ever add in songs that you’ve written with bands into your solo sets?

I mean I’m the boss. I can do whatever I want, so who knows? It’s never happened before, but I could play a song from The Unicorns if I wanted to or from Islands or whatever. I’ve been really lucky, though. It’s been nice because most people who come to the show come to hear [City of Quartz] so I don’t have to feel like they’re waiting to hear something from a band I’ve been in before.

What has it been like to be able to experience music in different ways throughout your career, rather than just being with one band?

Well, that definitely wasn’t intended. I fully intended on playing with The Unicorns forever, but life has a way of interrupting those plans. It’s been good though being able to access different modes, musically.

Are you excited to play in Iowa City?

I’m really excited for the show. I think it’s been about eight years since I’ve played there so I’m definitely due for a show.