Before interstates, before pavement and even before concrete, Iowa City was becoming a major crossroads–for both the state and the nation.

It began in 1839 when the Old Military Road–which got its name from the Iowa Dragoons that briefly used the thoroughfare–was built from Dubuque to Iowa City, the new territorial capitol. This first road followed a line of stakes set by a surveyor named Tilghman, who outlined the road along a native trail called the Warrior’s Path that ran from Minnesota to the Gulf.

After the path was set, a man named Lyman Dillon dug a single furrow following Tilghman’s stakes and using a team of oxen and huge prairie breaking plow. The following year, the furrow was extended to the Missouri border via Fairfield, totalling nearly 200 miles in length and making it the longest continuous furrow in the world at the time. Sections of this path still exist today on parts of North Dodge and Highway 1. 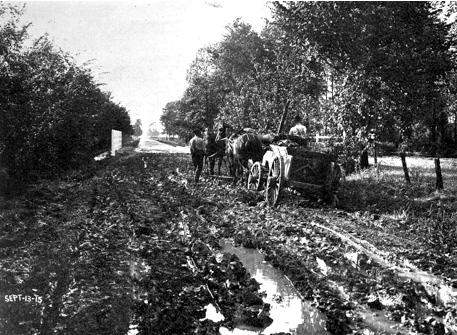 Early roads are the reason for why it can be difficult to traverse Iowa City: They were not oriented to the cardinal directions, but rather were topographic roads that followed ridges and hills. They divided a town full of steep ravines, streams, wetlands and cliffs, with the Iowa River running down the middle. These roads were constructed at a time that predated grid streets, when bridges were few, all roads were dirt and being mired in mud was normal.

Soon new roads connecting Davenport, Muscatine, Burlington, Des Moines and Marion led into the city. These new highways served Gold Rush ‘49ers, stagecoaches and pioneers in Conestoga wagons. Where the University of Iowa Memorial Union now stands was the Western Stage Company which dominated stagecoach travel in Iowa before they were superseded by the railroad around 1855. 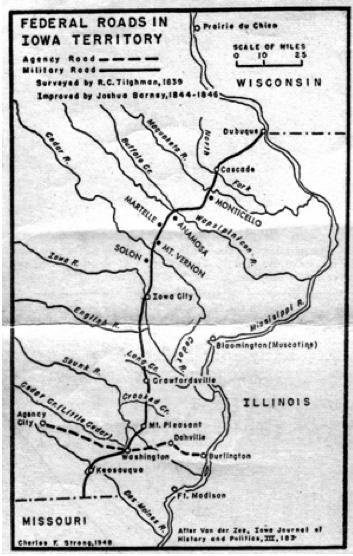 Numerous hotels in town catered to legislators and travelers visiting Iowa City via the new roads. Standing from this era on North Linn Street is the 1855 hotel across from the Union Brewery, now the Haunted Bookshop. On Bloomington Street are the 1874 Holub Apartments, now Pagliai’s Pizza. Nearby, at 106 E. Jefferson, is a 1849 hotel that was converted from a Catholic girls’ school.

By 1855, trains began connecting Iowa City to the communities where stagecoaches once ran. Still standing near the old train station are two old railroad hotels located on the 500 block of South Dubuque and the 600 block of South Clinton.

In the 1880s the Good Roads Movement was started by bicyclists to improve the abysmal road conditions. Forming a powerful lobby, they pushed road legislation in the state that culminated not in bicycle roads, but rather the paved streets of today. These early processes presaged Iowa City’s biggest transportation influence: the automobile.

The routes through Iowa City were eventually improved by brick paving with new sewers beneath. With the bricks laid and stone curbing installed, Iowa City entered a new era referred to as “Out of the Mud.” Experimental roads were created when the first “bitulithic” (asphalt) paving was laid in front of Old Capitol in 1906.

By the beginning of the 20th Century, Iowa City was at the center of a motorized transportation network. Horse-powered trolleys gave way to electric trolleys, and starting in 1912, automobile boosterism began the Registered Highway Era in Iowa, and local routes were promoted by automobile owners.

In 1916, the telephone pole at the corner of Washington and Dubuque, in front of the Jefferson Hotel in Iowa City, displayed the symbols of more important tourist roads than any other pole in the world, with the markings of the River-to-River, Red Ball, Waterloo and Keokuk Belt Line and St. Paul-Burlington-St. Louis route, as well as the Kansas City and Gulf, the Black Diamond (now Melrose Ave.), the M. and M., the Red Cross, the Burlington Way and the Orange and White routes. At the pole’s top was a ‘AAA’ (American Automobile Association) symbol.

Today, the old pavement of the Red Ball Route can still be seen on Dubuque Street and a 1911 concrete culvert is still visible just south of Mayflower Hall. The Old Military Road and Red Ball Route have given way to U.S. 218. The stage coach road from Iowa City to Des Moines became the River-to-River Road, then U.S. 6 and eventually Interstate 80.

Driving excursions on the trails that became the roads and highways that shaped our city are still possible. Take the Black Diamond to Cosgrove. Drive along Dillon’s Furrow Road and the Old Military Road on Highway 1 north to Solon or charming Mt. Vernon. Eastward follow the Des Moines stage route, River-to-River Road and Old Highway 6 west to Oxford. Next to U.S. 218 south of town is the Red Ball Road to Hills and beyond.

Marlin R. Ingalls is a professional archaeologist, historian and architectural historian within Iowa’s office of the State archaeologist. He is a member of the State Historical Society of Iowa’s Technical Advisory Network and former member of the Iowa’s State Nomination Review Committee, which reviews nominations for listing on The National Register of Historic Places. He is also a consultant specializing in helping preservationists and communities evaluate, document and restore their historic buildings, neighborhoods and other historic resources.