Rep. Steve King’s comment to MSNBC’s Mark Halperin on Monday that Hillary Clinton “is someone I can work with,” coupled with a reluctance on Radio Iowa to formally endorse the Republican candidate, has many Iowans wondering where their congressman stands with regards to his support for Donald J. Trump. While King — the former national co-chairman of Sen. Ted Cruz’s unsuccessful presidential campaign — remains a holdout, he seems to lack the conviction of Cruz. And following Trump’s anti-terrorism speech, delivered Monday in New York, King may be coming around to the idea of an endorsement after all. 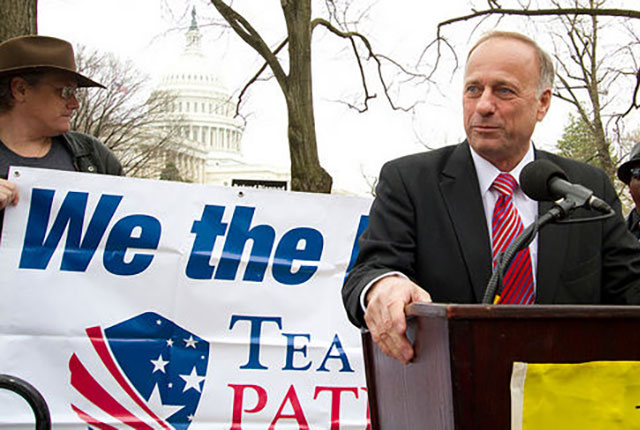 “I’m more enthusiastic after I read his speech on defeating the ideology. He’s really the first candidate that’s uttered those words, defeat the ideology of radical Islamic terrorism,” said King in a CNN call-in Tuesday, according to Politico..

A number of eyebrows were raised Monday, though, when King not only resisted an out-right endorsement of Trump, but expressed an openness to working with Clinton should she assume the presidency.

“If it’s just Hillary Clinton in a room with no staff and no press she is someone I can work with to this extent. She does understand policy. You can talk business with her. Whether she reacts to that outside that room or not is unproven as far as I am concerned,” King said on MSNBC’s Morning Joe.

“I was in a position where we did that each year for several years where she was Secretary of State and I was ranking member of the immigration subcommittee. We were required by law to sit down and meet once a year. And I found those conversations to be reasonable policy based because there was no one in the room listening,” said King.

What is the significance of Congressman Steve King’s endorsement of the GOP candidate? It carries more weight than one might assume, for starters, Cruz’s victory in the Iowa caucuses was due largely to the efforts of King and his rallying of state Christian conservatives.

“I believe Ted Cruz is the candidate that’s the answer to my prayers. A candidate whom God will use to restore the soul of America,” said King in a press conference held on the eve of the caucuses.

And it would seem that the prayers of many other Iowa Christian conservatives were answered when Cruz captured an unlikely caucus victory — one that did not sit well with Trump, who claimed that King and Cruz won via foul-play.

“Either a new election should take place or Cruz results nullified,” said Trump on Twitter following the caucus.

For now, a kind-of sort-of endorsement I guess …

“The press reported that I endorsed him. That’s how they interpreted the language. I’m not going to deny that,” said King.

“I haven’t had a personal conversation with him in months now,” said King. “If that happens, it makes it more likely that I could come out in the full-throated hyperbole and superlative methodology of endorsement.”

The possibility that Trump and former Iowa Cruz-backers like King might bury the hatchet should make the Clinton camp nervous. Given Iowa’s swing-state status in the upcoming election, having King in Trump’s court could be pivotal to his capturing the White House.

According to Politico, when the CNN interviewer asked King if Trump should release his tax returns King said, “No, that water has gone over the dam.”

“We’re in the middle of August now and we’re on the downhill slide of the presidential campaign,” said King. “And you have $10 billion to poke through, we never poke through all that before November”