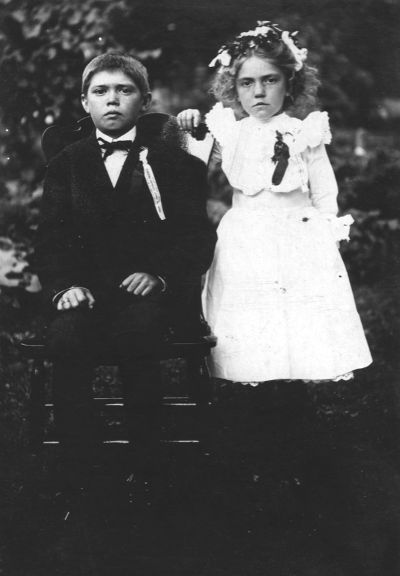 When it was time for calving John Jr and Hank would always be at the ready 24/7. Sometimes it would be young Johnny sent by Jr to fetch Hank. And sometimes Martha would ride a pony over to Jr’s place even in the middle of the night. When it was time for calving, mother nature set the schedule. And calving was serious business because it meant a new animal to add to their small herds. Dealing with the cows could also be dangerous back-breaking work as sometimes the mothers had to be repositioned or held in place so they wouldn’t harm the calf. Often the calf would be in bad shape and need to be revived or brought into their houses to be kept warm by the stove. During the calving Johnny and Martha would also be busy running errands like fetching clean water and rags or stoking a stove to make sure it was warm for the calf.

Johnny and Martha became friends over the long Iowa summers watching their fathers help each other with thousands of various tasks that came with being a struggling farmer in the 1930s. However, at the Hickory Creek township one–room school, they often feigned ignorance of each other and seldom spoke outside of their required classroom interactions. The summers were another story, as both often shared the weight of heavy buckets of feed or water on whichever farm their fathers happened to be working at that day. Both were quiet kids, and the chores seldom afforded them a lot of time for play, but occasionally when Jr and Hank were distracted they might sneak down to Hickory Creek for a quick splash or crawfish hunt. During these moments of lightness away from the work they would sometimes casually forget their usual stoicism and let themselves subtly brush against the others side, or place a hand on a shoulder for balance as they waded through the creek. While carrying buckets, work was the focus, and yet on occasion there would be a soft smile when their eyes met. Back in school in the fall, after another difficult harvest, they often shared the same studies since their birthdays were only three months apart. Yet they had an unspoken agreement to keep their shared summer days to themselves.

That changed one calving season when Jr’s barn burnt down with Jr and Hank inside. The sheriff said he thought it was probably a kicked over lantern just as the calf was being born. They found Hank just inside the latched barn door and Jr a few feet behind with the calf. Most likely he had been trying to carry it to safety. Johnny and Martha had been in the house fetching some warm buckets of water and clean rags, and when they saw the barn the roof was already falling into the flames. They ran toward the barn with their buckets of water, but were stopped in their tracks by the heat, and could only watch as the barn quickly came down.

As a convenience to their mothers, Johnny’s Grandpa Jack (John Sr) took both Johnny and Martha to the dual funeral in the little buggy. Grandpa Jack took Johnny to get his first suit and Martha wore the white dress she got for her cousin Ruth’s wedding that spring. While it really wasn’t appropriate for her father’s funeral, her recent growth spurt meant it was her only nice dress that still fit. Grandma Ruth fixed white spring flowers in Martha’s hair with black ribbons.

After the funeral at the country church, Grandpa Jack took a detour into town with the buggy.

The town was busy with the Bohemian Heritage Festival that weekend and Grandpa Jack thought it might be a good distraction. In truth Johnny and Martha were both in a state of shock and moved through the festival as if in a dream. The shouts from the carnival games were just distant distractions as Grandpa Jack led them through the midway. Somehow they both found themselves on a stage and the next thing they knew they were winning awards for “Best Dressed” at the festival. The prize was a photo portrait, the first photo either had ever had taken. Grandpa Jack had fetched a chair for Johnny because he looked like he might have trouble standing any longer. The bright flash from the photographer was only a momentary shock, which quickly washed over them and failed to wake them from their dreamstates. Johnny and Martha each received a copy of the portrait, with Johnny in his new black suit and Martha standing next to him in her white dress with her arm on the back of the chair.

Despite their fathers’ deaths both families were able to stay on their farms as the grandfathers were still healthy enough to come back to the farms they had started themselves as young men. Martha kept that portrait with the shocked look on their faces on the mantle of her family home for the rest of her life. Johnny and Martha started walking to school together every day and no longer made a secret of their friendship. They helped Grandpa Jack and Martha’s Grandpa Peter keep up the farms and when they were old enough took over the farms themselves. Johnny brought over his copy of the portrait when he moved in the day after they married.