Waves of amber hit the floor in a sweeping motion, followed by the sound of broken glass. Jerry had dropped his beer, on purpose. The bartender looked up lazily from the glass he was polishing, only to look back down again. The other patrons in the bar continued to stare into their glasses, uninterested in any interruption of their languid meditation.

Jerry was incredulous. The entire bar seemed to exist on a different plane of the time space continuum, an alternate universe that slowly oozed, spread, and intoxicated those who entered it. From the moment he walked in the door, Jerry felt his heartbeat slow down and his eyelids droop, yet he was completely sober. A person could get drunk off the air here, he observed.

The bartender leaned forward, still polishing a glass. “I suppose you need another?” He muttered.

So he did the most logical thing: he tried to break the trance. He dropped the beer, relishing the sound of the breaking glass, hoping it would tear a hole in the bizarre canvas of the bar’s atmosphere. But there was nothing, absolutely nothing.

Not knowing what else to do, Jerry sat down. The bartender leaned forward, still polishing a glass. “I suppose you need another?” He muttered.

It was a simple question, but Jerry was suddenly confused. “Yes…” He said, slowly, unsure of himself. He felt himself sink into the cushion of the barstool and his shoulders slump forward. He was overwhelmed by a feeling of dejection.

He solemnly turned his head toward the spot he had dropped his beer. The floor was clean, not a shard of broken glass to be seen. He wondered if he had even broken the bottle, or if he had imagined it. Somehow, it didn’t seem to matter. When he turned back to the bar, there was a fresh bottle of beer in front of him and the bartender had returned to polishing his glass.

“What is this place?” Jerry asked the bartender.

The bartender glanced up. “This is Thompson’s.”

Jerry’s head was spinning. Part of his beer was gone but he could not remember drinking it. “Who are these people?” He asked.

The bartender looked at him oddly. “Customers. Like you.”

“Who are they? Where are they from?” Jerry was getting angry.

“Where are you from?” The bartender walked away slowly, not waiting for an answer.

Jerry’s beer was gone. He could not remember where he was from. He did not know where home was anymore. He looked around desperately for a clock but could not find one.

“Bartender!” He cried. The bartender turned towards him again, but his hair had turned white and his face had aged horribly.

Jerry shuddered. “What time is it?!”

Jerry covered his face with his hands and moaned. He felt the deep wrinkles on his face and the aches of arthritis in his joints and he knew it had to be true, but how? How had this happened?

The bartender sneered at him, still polishing his glass. “There’s no point in trying to find your way.”

Jerry struggled to stand up and tipped his barstool over. He fell to floor with a loud crash. Finally, the patrons responded.

“Bartender, buy the man a shot on me.”

“I just want to leave!” Jerry struggled to stand up. The patrons grabbed him, putting him back on his stool.

“Get my good buddy Jerry another shot.” The patrons poured a shot down Jerry’s throat. He kicked his legs and gurgled. The alcohol spread through his veins. Slowly, he stopped fighting. He sunk into his stool and his shoulders slumped forward. The patrons patted his back and sat back down.

Jerry decided that he would stay at this place for just a while longer.

What is Hot Tin Roof? 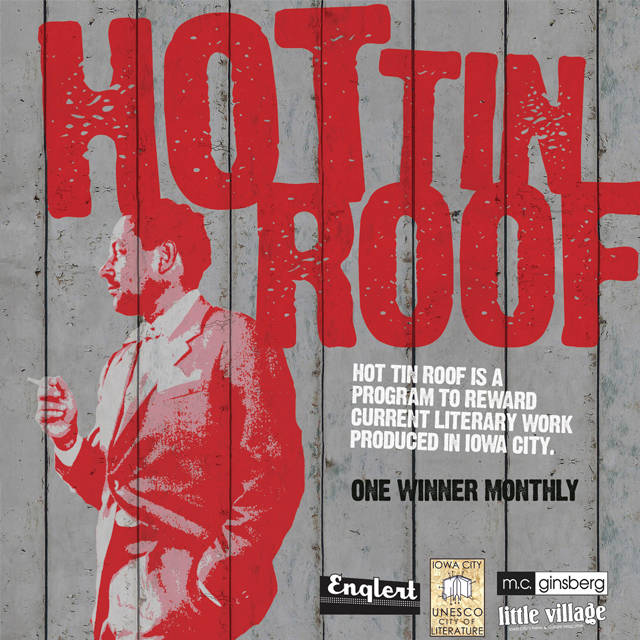