It’s graduation time in Iowa City, and for the University of Iowa’s School of Art and Art History, that means an avalanche of visiting artist and MFA shows are going up and then coming down far too quickly. Off campus, there is the general upswell of creative activity that spring always seems to bring: A new art gallery has opened up on the south side of town—McNutt Gallery—and alternative downtown spaces like the Paper Nest are staying busy presenting interesting shows.

For this column, though, we will attempt to draw some attention to a few highlights from the MFA show circuit. These easy-to-miss shows almost always last only one week, and certainly deserve more than a paragraph each, but here are some quick thoughts on some of the work: 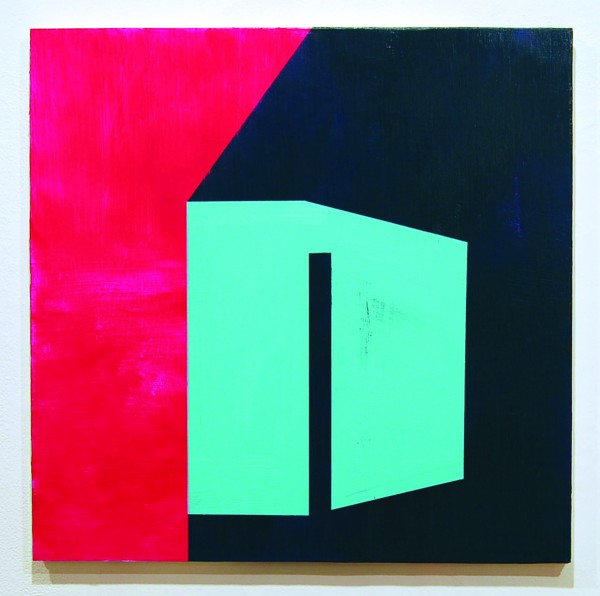 Mary Coats’ MFA show in Art Gallery West was as sensitively calibrated as those of us who have come to know her work would expect. An incredibly intense wall painting and some recent paintings with slightly looser forms were balanced against carefully selected pairings of paintings from the past two years. One section stood out to me sharply: In the back of the gallery, covering holes in the wall that have never been patched, were a collection of four very minimal wood, white and gray paintings with pink edges that never looked better. Held against the noise of some of the more intense color combinations in the main gallery, these quiet works give a sense of a more delicate range of expression.

THE ARTISTS
McNutt Gallery (204 Stevens Drive)
Through May 22

The McNutt Gallery is making a go at showing serious work for an Iowa City audience, and this group show includes an impressive roster of faculty, visitors, current and former Iowa students and others. Located in a space outside of the downtown loop, this gallery has the potential to really add something new to the local art scene.

Liz Davenport’s show at Public Space One (PS1) was large, baroque and delightful. I was pleased to see paintings that I have become familiar with dressed up in new clothing, looking confident and assured in their surroundings. New work surprised me: The “Water Room” with its waves is fresh and delightfully simple. There was evidence all around the gallery of a confident hand and a genuine confrontation with the disconcerting emptinesses of modern life. But Davenport’s paintings hold out against the abyss: Her darkly imaginative world keeps the artist present in the work, the precariously constructed worlds acting as a kind of ballast against despair.

Naqeeb Stevens’ MFA show in the Porch Gallery at Studio Arts had as its center a handmade sidewalk apron—a transition from sidewalk to street. An ungainly thing, and something I only started to really notice when pushing around a stroller on a regular basis, but a moment of everyday transition in walking. The two videos, hard to look at, forced a confrontation with the in-between of life—the words describing dialogue (“said,” “asked,” “replied”) and steps through an endless hallway in a nameless store.

Heath Schultz’s “unspectacular” MFA show in the Drewlowe made very clear why the current School of Art and Art History’s prohibition of MFA shows outside of University property is a little silly. Two chairs in front of a screen did the job of “showing” his video, but the screenings at PS1 were much more to the point. In any event, Schultz re-made Guy Debord’s The Society of the Spectacle for the 21st Century, sustaining Debord’s argument, correcting his errors and generally making clear that things are as bad as they ever were. But there is hope in this film—perhaps hope only that by thinking a little bit more clearly, what is real and what is spectacle might more readily reveal themselves. This, at least, would be progress.

Jeff Trueblood’s MFA show in Art Gallery West was long on atmosphere: He painted the walls a deep blue-gray, which allowed his “night” paintings a sufficiently dark ground not to pop off the walls. These paintings represent largely uninhabited dark landscapes, and abound in acidic purples and violet-reds balanced against natural landscape forms or, in a couple of notable cases, eerily lit snows. All is not well in this world, and in their most successful moments, the black of night, the violet-tinged shadows and warm man-made lighting open out into a quietly disturbing scenario.