Blair Gauntt and his longtime friend and collaborator Rich Dana were leading a hands-on zine making workshop at the 2015 edition of ICON — the long-running Iowa science fiction convention — when Gauntt picked up a ballpoint pen and started drawing.

“I realized at that point I hadn’t drawn — I hadn’t made lines with my hands — in like two decades,” Gauntt said in an interview at Roasters, a coffee shop not far from his Hiawatha home. 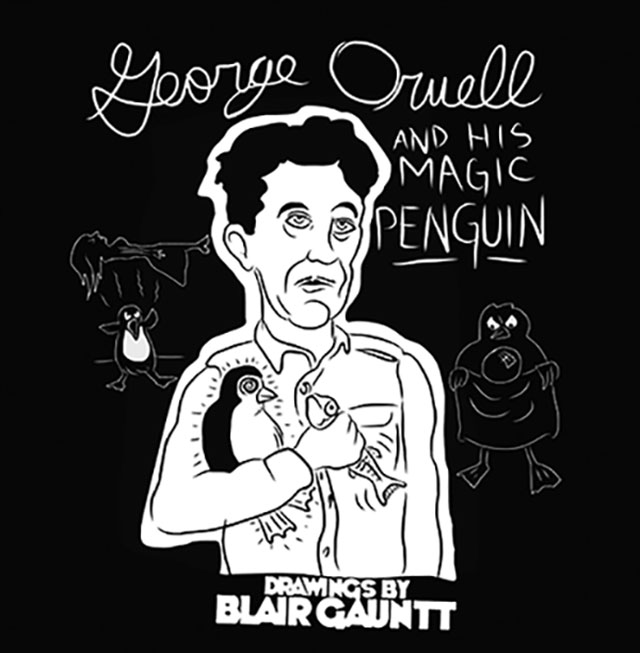 Not that he hadn’t been doing creative work, and a lot of it. He’s a commercial artist and graphic designer who has run his own business for better than 30 years after a stretch of doing similar work for agencies in Chicago. Gauntt also works with Dana — “We’ve been pretty much heterosexual lifemate pals” since meeting as freshmen at Coe — to produce OBSOLETE! Magazine. The two also launched the original New Bohemia movement in Cedar Rapids with the intention of focusing on studio space and affordable housing for artists.

But Gauntt, who studied at the School of the Art Institute of Chicago, hadn’t been drawing. After that session at ICON, however, the floodgates were open.

“Stuff has been spilling out,” he said.

That “stuff” has taken the form of single-panel, black and white cartoons, most featuring a well-known figure in an outlandish context. “I was just doing them for my own entertainment,” Gauntt said. 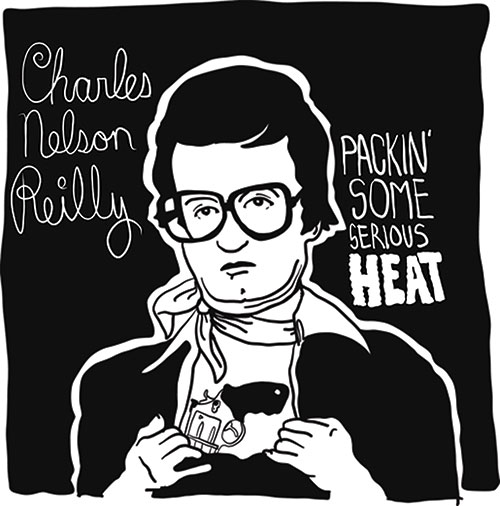 He shared several of the cartoons on his Facebook page, and was soon receiving positive feedback. F. John Herbert, executive director of Legion Arts, suggested Gauntt should have a gallery show, which led to the idea of a book. Both notions have come to fruition, with several of the images currently on display in Legion Arts’ CSPS building in the New Bohemia district (through Oct. 2) and many more collected in George Orwell and His Magic Penguin, published Sept. 1 by Gauntt and Dana’s Obsolete Press.

In his forward to the book, Dana comments on his friendship with Gauntt and the ideas and influences that drive Gauntt’s art.
“[W]e share an odd ontological shorthand based on late 20th century popular culture and an utterly absurd, agnostic view of the universe. The cartoons in this book are a result of that sensibility — a bouillabaisse of literary references and fanboy in-jokes, blended in the Cuisinart that is Blair’s brain.”

The resulting images are what Gauntt called “intellectual lowbrow.”

“They’re a little esoteric,” he admitted. “Most of this stuff is highly personal stuff that I like that I grew up with … I’m shooting pretty high for sophistication.”

Take, for example, “Anton Chekhov thinks sitcom,” a drawing featuring the famed playwright imagining a new work starring the three sisters from the 1960s television series Petticoat Junction. The joke lands if you recognize the sisters from the show — and if you remember that Chekhov penned a play titled The Three Sisters.

Similarly, “Ayn Rand and her chain smoking weasel spend the day together,” works best for viewers who know that Rand was herself a chain smoker and expected everyone in her employ to smoke, as well.

Some of the jokes are more easily sussed out — “Bill Haley only rocked about six or seven hours a day,” for example — and sometimes the gag is, perhaps, that there isn’t a gag.

“People shouldn’t feel bad if they don’t get a joke,” Gauntt said. “Sometimes the joke isn’t even there.”

The title image is a case in point. Gauntt doesn’t know where the idea of the magic penguin came from or why it struck him as right for George Orwell. At the suggestion that maybe it had something to do with Animal Farm, Orwell’s allegorical novel, Gauntt chuckled and admitted that hadn’t occurred to him.

Gauntt decided against including explanatory text for the images, in part because he hopes readers might research the jokes on their own, just as he used to do when reading Bill Griffith’s famed comic “Zippy the Pinhead.” But he also wants the pieces to stand on their own.

“I can enrich these by explaining them,” he said, “but I won’t be there to explain them, so I’m hopeful the starkness of the art will be appealing.”

Gauntt creates the images on his iPad Pro using Adobe Draw. He admits that working digitally makes him a bit uncomfortable.

“I argue with myself as to whether it is authentic if it’s digital,” he said, “but everyone tells me to get over it.”

To his mind, the digital process means there is no true original of an image, but fellow artists have assured him that there is an original — just one that can be easily moved around and “isn’t sitting in a drawer.”

He does acknowledge the upsides of the digital process, too. “Working digitally is instant gratification. Plus, it’s really easy to change.”

The book has garnered praise from some of Gauntt’s heroes. In back cover blurbs, Bill Griffith calls it “[c]lever, literate and graphically accomplished,” while underground comix pioneer Skip Williamson writes, “Blair Gauntt is an amazing virtuoso talent who harvests the culture voraciously.” Renowned illustrator Mitch O’Connell suggests George Orwell and His Magic Penguin is “[t]he perfect book collection for insightful, intelligent, worldly and well-read individuals who like a good poop joke every once in awhile!” 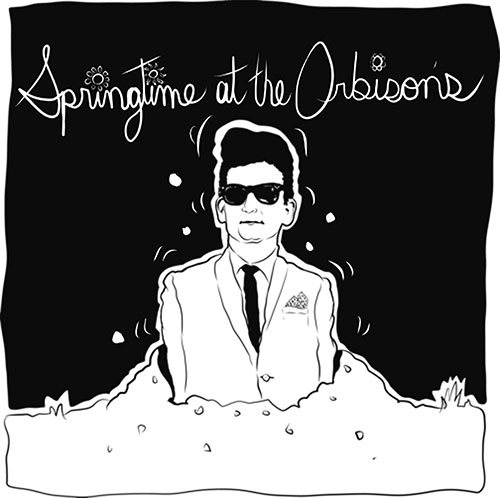 That’s high — and well-deserved — praise for a book with an extremely limited print run put out by the artist’s own publishing house. Gauntt is hopeful that the support of artists of the stature of Griffith, Williamson and O’Connell might open the doors to a distribution deal.

He admits, however, “I have no concept of a business plan. I don’t know my target audience.”

But that’s okay, he says. “I think it’s a punk aesthetic.”

George Orwell and His Magic Penguin is available online. It is also available from local bookstores.

Born colorblind and therefore convinced he’d never enjoy graphic forms of storytelling, Rob Cline was first bitten by the comics bug in college. The resulting virus lay dormant for many years before it was activated by the inscrutable work of Grant Morrison. Now Cline seeks out the good and bad across the comics landscape as the Colorblind Comics Critic. This article was originally published in Little Village issue 205.