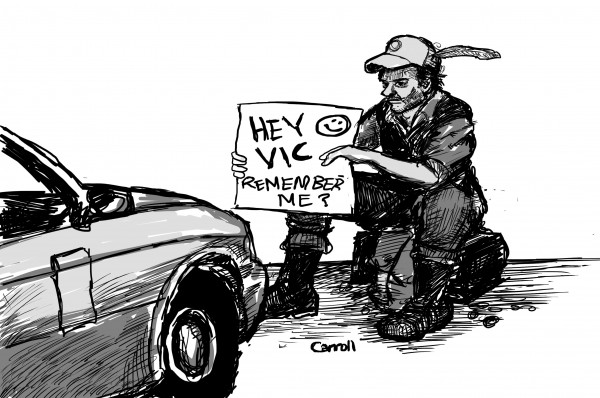 The bullshit I get dragged into always starts with a phone call. In this case, voicemail.

“We like your background and want to interview you.”

I nearly broke my thumbs calling back. I even shaved and showed up in my funeral coat. That’s when they cornered me, chatting me up as to my “current employment.” Everybody likes hearing about the taxi biz but in an interview it all comes off like we’re riding in the same airport shuttle. Especially when I got to raking over the stinking guts of my work, my hosts seemed more amused than impressed, the captain of Human Resources smiling as he chimed in: “Lie down with dogs and you might catch cold!”

Was he really a malaprop, or was that some kind of corporate chicanery? Was desperation glowing on me like a fever sweat? Whichever, I’d felt the trap door open, or maybe it was already hanging open and only then did I slip through. They stared like catatonics as I filled in the blanks of their remaining questions and a phone rang unanswered in the hall. Afterward, the lieutenant of Human Resources ushered me to the exit and ordered that I enjoy the holidays.

“Stay healthy,” I saluted him.

My calls were not returned until Monday before Thanksgiving but I didn’t get the job. I was, by then, returned safely within the glass box of my taxi, pushing streets looking for flags, feeling outclassed by none in my office on wheels.

Same night, my phone rang and Beaudry was on the other end. The call came from a Mississippi exchange but Beaudry said he was waiting at the Megabus.

“Waitaminute,” I said into the phone. “Here, in town?”

When I drew to the curb he was showing card tricks to passersby, “Is this your card?”

Seeing my taxi, he jumped in front like a regular fare. I hadn’t seen him in years. Beaudry was always scrawny but had shrunk into his clothes. He had a guitar tattooed on his neck.

“I thought you were in California.”

“And I thought you were dead!” he heehawed back at me, showing he had lost one of his teeth, the left maxillary lateral incisor. “I mighta done a gold cap but the pain got so bad I jes knocked it out my own damn head, good God!”

My old friend had sprouted a drawl like he’d drawn more in Mississippi than just a phone. I watched his hands as they shuffled the playing cards. Beaudry was an addict in constant recovery. Opiates were his kick, heroin and morphine.

“And mebbe jes a li’l methamphetamine,” he was telling me, burping his cards, and since I didn’t know meth to be his kick I took to stomping on that loose board until he let it all spill, how he’d hit up methadone clinics in L.A., how he’d run south chasing girls and dragons, finally landing in Memphis with hopes of scaring up dying bluesmen that might teach him things. What he’d wanted to learn, Beaudry could not say.

What he could tell me was this: “I been sober nearly a whole year, man.”

As matters stood, I wasn’t going anywhere for Thanksgiving and had booked myself to drive all week. And Beaudry, having not anywhere to be and needing brotherly support, would ride with me that whole time, my road dog at shotgun. He shuffled his cards and cajoled my fares, producing silver dollars out of their ears.

Ever adept at the sleight of hand, Beaudry had waited to ask where he could score synthetic cannabis.

I felt like an asshole saying it: “Aren’t you clean and sober?”

This was our Thanksgiving and we were picking the bones of those left in town. We flagged at the crosswalks and off the bat the fare asked, “Who the hell is this guy, your boyfriend?”

Now by the glow of the dome light I saw the flag was none other than the lieutenant of Human Resources, the guy who had shown me the door after my lousy interview. He didn’t recognize me.

“Take me to North Liberty, you homos.”

As it happens, the subject of drug use comes up a lot in the taxi. Beaudry navigated that chatter, running his clean and sober bit. “But I done smoke crack,” he assured the flag. “I done meth, bath salts, Ketamine—anything

you smoke in a light bulb I can shoot in my damn leg.”

Three days of Beaudry’s jive accent and junkie wisdoms were making my skin crawl, and I took the window down to spit.

In North Liberty, we arrived to a subdivision on a fake lake and a three-stall garage on every house. The fare asked: “You homos want to smoke something?”

Beaudry twisted in his seat: “You got fake weed?”

My old friend looked at me wide-eyed then followed.

I never enter the homes of fares: Bad form. So I parked in the enormous driveway, letting them get on ten minutes before going after him. I found them puffing a spliff, Beaudry holding up to the garage light a bud the size of a Coulter pinecone. All around them were opened appliance boxes and inside the boxes were vacuum-sealed five-pound bags of non-synthetic cannabis.

“I take a corporate paycheck,” bragged the fare, “But here’s my real money, Afghan kush.”

Everybody wants to know: What’s the weirdest thing that ever happened in your taxi? But the problem is the job never changes—not its sights or sounds, nor the Maury Povich cast….Sure, it’s interesting but peek too long and get black-eyed by the trick kaleidoscope.

Stick a fork in me, I think I’m done.

Vic Pasternak is driving around at night looking in your windows.