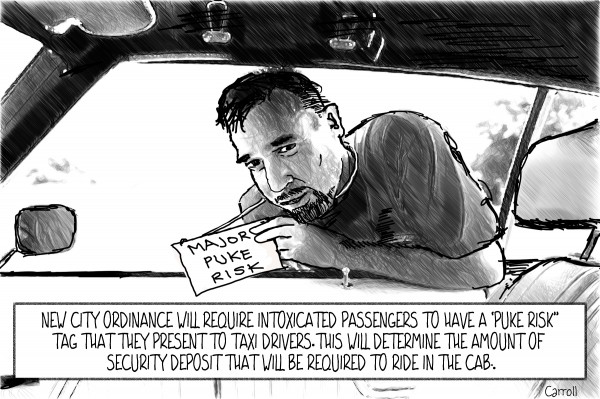 Funniest puke story I have took place in icy winter, a woman asking that I halt the taxi and let her blow out. I stopped where we were, which happened to be a slick hilltop. She scrambled out and hit that ice collapsing to her knees in the headlights. The slope of the hill took her from there and she went sliding down the ice on all fours, rotating and zuking. She was a good sport though, before and afterward.

I should have caught it by his green stare and bilious breath. I should have heard the warbling in his throat. Given that he’s been drinking heavily, any movement on his part has been restricted to an abrupt wheeling of the arms.

The gagging I’ve missed but the arms I see in my rearview. He’s pointing at something outside of the taxi, perhaps the curb. My foot comes off the gas.

Jamming brakes soft as I can stomp them, I drift to curbside as dude brings it up for a vote, slapping hand over mouth just in time to fire auxiliary gouts of regurged chunder out from his nostrils, and this as he tips back wildly, the other paw snatching for something to grab onto but catching his girl in the maw as he hoses the ceiling, which you will presently notice has been rattle-canned black to obscure that its fabric has come down. No matter, no matter—pressing business.

Stopping the rig, I throw on the lights.

But dude seems to have kept most of it to himself. He drops the hand from his mouth and sucks in a deep breath. Water streams from his blooded eyes. He groans, “Ah jeez.”

“I thought you might’ve blown full out,” I say in a complimentary fashion while passing the flashlight over affairs.

Next he bends and sends everything from his asshole forward roaring onto the carpet in three good heaves, what on later inspection proves to be an indiscriminate muddle of dark beer happy hour nachos two kinds of red sauce white liquor hot wings bite-shaped bits of dough, and a margarita, all of which he has fanned onto the backs of both front seats, and into the door pocket, and over the window crank as I’m hollering that he take it out of the cab.

His girl laughs like she doesn’t know much else. She yells out to where dude has tumbled in the grass, cheering him to say, “Negative chug, whisky-dick!”

I want to ask what she finds so funny.

Instead I say: “Another hundred bucks poorly spent.”

“It’s a hundred dollars to puke in here?! Nuh-uh!”

“Uh-huh—it’s right there on my rate sheet.”

“Give me a break, right on the where? What’s on a rate sheet?”

I am ever the bubble-popper, always the fellow rapping on the door to inquire about your firstborn. I pluck the rate sheet off the dashboard and give her the show.

“See under ‘BODILY FLUIDS’? A hundred bucks to hork in the cab. Two hundred if you hork on me.”

“I am not disputing that, ma’am. But you can likewise not dispute that your companion has horked in the taxicab. And the pleasure of that indulgence costs a hundred bucks.”

The taxi reeks like rotting gingko and I’m gasping through my mouth. Yet girl refuses to return the rate sheet without a full perusal. She asks: “So that’s, like, the inside, right?”

“If the inside comes outside, then yah—that’s a hundred bucks.”

“And that’s a hundred bucks,” we say together like a church refrain.

Flopping with a start against the passenger-side windows, dude growls like a zombie while figuring out the door handle. Succeeding, he flops in the rear beside the girl whose eyes are burning at me like coal cinders.

Dude closes his own eyes and his teeth are chattering.

“Tell it to the beef whistler, honey—I still need a hundred bucks or we’re not moving.”

She slugs her man in the shoulder and dude says something like, “Awassamahlagh?”

“This is a hundred dollars and you have to pay him right now! Did you hear me?”

Dude lays his head back, shuts his eyes tight, gurgles.

“Fuck it,” she says, shoving him over to extract his wallet, whereupon he lets rip a great fart and causes himself to laugh.

She sighs exaggeratedly and climbs into the front seat to hand me his credit card.

Next, she’s leaning into the back to slug him some more, railing: “Three hours ago I told you to quit drinking—I’m going home, tonight was a date.”

At dude’s place I run his card for the meter plus a hundred, plus a few bucks more to take girl her separate way, and we leave dude in the street hollering fuck yous but not before I tell him he should throw out his clothes. Next stop, I hump the curb rolling into girl’s driveway and immediately gear to R, ready to back out and haul ass for the car wash. My jaw hurts from mouth-breathing. I want to shower, and to brush my teeth.

But girl is putting to me those hot coals she’s got for eyes.

“So how much do you charge for other bodily fluids?”

I’m obtuse with chicks so I ask her to spell it out.

“He shouldn’t’ve turned me away hot. You want to plug in?”

I tell her: “One time, a different time from this, I had a guy’s colostomy bag rupture where you’re sitting.”

She slams the door with terrific force, yelling at the sky, “God, why are dude’s all such assholes!”

Vic Pasternak likes to help people enjoy the consequences of their actions.