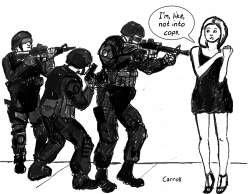 It’s always fun to explain what “SFP” means to a cop.

“Dispatch said she was headed SFP,” for example.

The cop turns his ear on that, “Where’s that?”

This is out on Bartelt Road where I’ve been stopped by police. Five officers swarm my taxi, each swinging an assault rifle. Squad cars from multiple jurisdictions flash colored lights and even the highway dicks are representing. A gawking multitude stands the midnight edges, silhouetted as in a phantasmagoria. I’m out here because somebody has called a cab.

Compelled by the show, I ask the cop: “Big trouble tonight?”

Cop replies: “So then you don’t know who you’re picking up?”

I tell the officer I never know who or what I’m getting.

“Like I says, my dispatcher sent me here and he says the fare is going SFP.”

On this cue, my fare emerges from the apartments and is met by officers who quickly decide she is not the man they’re looking for. They escort her to my taxi, rifles yet hanging at the ready.

“And I don’t like guns. Where are you going?”

“Your dispatcher didn’t tell you? I don’t got an address!”

Dog days blew in early this year with two homicides at the end of June. Bartelt was scene to the second of these. And turns out I knew three of the four parties involved in these separate incidents. Back at the office I had to strike two names from our No-Haul List.

In our great American system, cab driving ranks high on the list of capitalist activities whereas community policing is something a lot more selfless. But what shitty jobs! At least cops are authorized to use their weapons.

Ours is a shared and gray world the boundaries of which at certain and definite points will be crossed. This is an eventuality, and this invisible line helps determine whether somebody goes home in a taxi or to jail in a squad car.

I bet if we polled the cops and hacks, they would agree that it’s the acute cases, the really shitty vampires, that give this kind of work the color of a bruise. As a cab driver, you look for it to happen, and you learn to wait for it. You happily take tons of shit from folks of every walk of life, encountering every bad attitude and behavior, the runarounds and light grifting, the folks glaring with entitlement, the drunken protests, broken protection orders, bad ideas, quasi-legal scenarios, threats and occasional instances of violence, the falling down dopers, the 86’d. But for as long as fares stay on The Right Side of the Line, there is no foul.

All the while you remain vigilant for that one reckless swine that comes to carry it all away for you, just like the Night Soil Man. And onto this person you will dump every catch basin in reserve. Some end up in jail, some walk back to town, but all join the illustrious No-Haul List.

Reminds me of an incident from years ago, back when Geronimo was still dispatching.

I had wheeled into the lot of a bar notorious for its drunks and their complications. A couple hurriedly leaped in the backseat directing me to Coralville, “And step on it.”

I obliged them. But something was off about the lady. She was scared, stinking with suds and fear. She begged her man: “Don’t you care what’s going to happen to you? Don’t you?”

Something was wrong but the dude kept his cool so far. He was likewise keeping his ride home, despite my bad vibes. Without much thinking about it, I nevertheless shut off my business radio.

Two minutes later, Geronimo was blowing up my phone.

“I’ve been checking you,” he grumbled. “Bring it back to the bar—cops want to talk to that guy.”

For the record, I was yet unaware of what had happened back at the bar. But hell no was I bringing this dude back there. Something about it was all wrong, his pent-up lady was practically screaming. But we weren’t turning back.

And it was here that he crossed the line, dragging his terrified companion into whatever bullshit we’d left in our dust. So I shifted to Plan B, ever the tactical necessity.

Geronimo was barking again: “Did you hear what I said? The cops—”

“Copy that,” I told the phone. “But if that drunk son of a bitch wants my cab, he has to flag me down.”

It took a moment to sink in but Geronimo found his cue: “Where at?”

“He can grab me at Physical Plant,” I said.

Geronimo rung off and I pulled over on Riverside to wait for the cops.

My dude was suspicious, natch.

“Aw naw, there’s this guy out of the plant,” I went on tap-dancing. “He’s riding with us out to Coralville. But he’s a drunk. Here, on the job.”

“They’re just going to find us at the house,” his lady complained.

It was a long minute before I saw the first cherries turning in my rearview. And I didn’t want this guy in my cab while the cruisers rolled into position.

Instead of cutting my throat, he cursed and leapt out of the backseat. An unmarked car had rolled up the sidewalk and two officers surprised him with a quick tackle. In my rearview I saw his face twist as they crushed him on the trunk.  They dragged the dude away and pinched the lady for possession. I told the cop about the exchange, they arrested him and then he cut me loose.

Back at the taxi shack, I later asked Geronimo what the noise was all about since the cops wouldn’t spill for me at the scene. My dispatcher looked flustered and told me it was about an unpaid debt of a hundred dollars.

“So he sticks his pal with a broken pint glass in the neck!”

For some of us, the light at the end of the tunnel belongs to an oncoming train. Or a vehicle with one headlight, for that matter.

Vic Pasternak won’t take no for an answer but he gives it all the time.