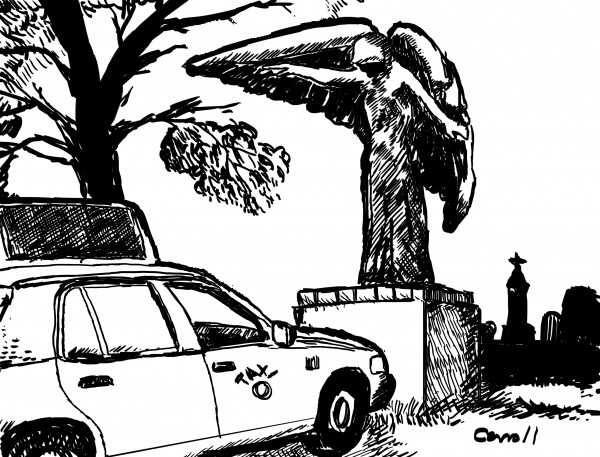 Weird things are ordinary in our business but things get a little weirder in the summertime. Everything has fallen quiet again, as if the city has exhaled. The traffic has abandoned whole stretches of painted road and the side streets shroud over with full trees. Signals burn red and green at vacant intersections. These lights, and the others glowing in the air, make every haunted lane look like a dream, or an 80s music video.

Perfect conditions for prowlers, or for stick up artists.

But where is anyone to stick up? Whole apartment blocks show every light burning but no furniture in the rooms. Even the taverns suffer on nights like this, each its own little space cheerfully lit but empty, like the box left behind when the shoes go out dancing.

Last week it was all caps and gowns and moving trucks. Now it’s this thick and gloomy silence.

His voice echoes in the lot of old St. Pats where three of us are parked waiting for our next call, me, #118 and #906. The radio hasn’t chirped for an hour.

With the cowboy hat over his face, #118 stretches over his hood, beached like a whale.

“Thank Christ, they’re gone,” he groans under the hat. “Give me workers and warehousers, the woodwork drunks, the junkies and church house cats—”

“Jesus Christ, I’m just so sick of their stupid shit.”

I ask him: “What’d church house cats ever do to you?”

“I don’t mean them. You know who I mean. I’m just happy they’re gone.”

The engines of our cabs tinkle and June bugs sputter around the perimeter lamps. I can hear their wings batting from here.

I ask him: “Spot me twenty, bruh—the week’s been rough and I need my whip.”

“Get your whip from somebody else, I’m fucking busted.”

“Exactly,” is what I want to say but don’t. Some of us seem relieved but everybody is broke. No point reminding them all.

Meanwhile, #906 sorts through his trunk of freeware scored from dumpsters and the levees of trash piled on the curbsides. The trunk is full of random clothes, outdated DVDs, a microwave with a smashed door, a computer monitor with food on it, a pile of books marked used, part of a kitchen table and a Louis Vuitton box.

The box makes a rolling sound when you gently wobble it back and forth.

#906 selects a great big purple one and flips the switch but nothing happens. He rattles it at his ear, shrugging: “Needs batteries.”

“They’re not from Chicago,” I remind them.

When we get bored of needling each other, we’ll go down to the shack and needle the dispatcher if he’s not being a grumpy bitch. Sometimes we barbecue and there are many safety meetings. We share stories and talk about how fucked up the cabs are. Mostly we are able to better recognize each other as human beings.

I tell the radio: “Sorry, boss—I was out waxing my taxi!”

“Adventure time,” says the radio, which is dispatch’s way of telling me he’s got an odd and perhaps unwanted call on the line, “I need you over at PDC.”

So I ten-four the radio and wave sayonara to the boys and slow roll it to Prairie Du Chien Road where I find my fare waiting at the bottom of her drive. She is a drunk, a lonely lady stuck in her forties, a nurse with access to pills. Her rump is dropped on two sacks of dirt, her foot propped on most of a case of beer, a Silver Bullet tipped over her mouth.

Seeing the dirt, I pop the trunk and step out to load it.

I see the sacks are potting soil mixed with polystyrene beads.

“Oakland the cemetery. I need to get all the way in the back.”

“I can bring you to the gate but not inside. It’s after sundown.”

Shit, it’s after midnight and I sound like an asshole saying it like that. Now she gives me a long, sarcastic look, “Oh is it already?”

“It’s after midnight,” I keep dancing with her. “Cemetery’s closed.”

“Okay then. Just take me to the cemetery.”

So, off we go. And then we’re done, as the cemetery is only three blocks south, a minimum fare.

But she lays into me when I halt at the gate.

“The cemetery closed at sundown.”

“So why are the gates open?”

The gates are never closed but this argument will get longer the more we sit here. So I wheel into the cemetery to the back, going slow and deep over dark hills and past the faintly lit Black Angel, all the way to the trees.

She tosses three sweaty dollars over my shoulder.

“That is all you will be receiving from me,” she says angrily.

I pop the trunk and even step out to unload the sacks of potting soil while she juggles her Silver Bullets and her cigarettes and her purse and a lighter.

“You aren’t going to ask me what the dirt’s for?”

“My best friend’s mother? She’s dead. She died last week. But they didn’t bury her well enough. They didn’t put enough dirt in her hole.”

Vic Pasternak won’t take no for an answer but he gives it all the time.