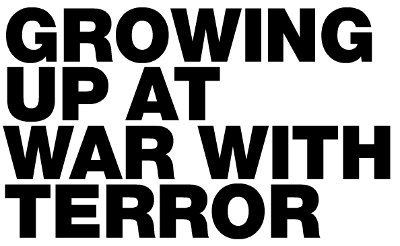 We asked Clear Creek Amana Junior Luke Andrews for his perspective on the recent killing of Osama Bin Laden and on coming of age post-9/11. Luke was 7 years old when the Twin Towers fell.

When I first heard about Osama bin Laden’s death, I didn’t believe it. One of my friends sent me a text message that said, “We got him.” My immediate reaction was disbelief and repulsion. I was disgusted that he was so excited about Bin Laden’s death. I woke up the next day and Democracy Now was on Free Speech TV. They were interviewing a reporter who has done a lot of great work in Iraq and Afghanistan and his opinion was like mine: We should not be celebrating a man’s death; it’s barbaric and sick. Yes, he was a very horrible person and, yes, he killed thousands of American citizens and deserves to spend the rest of his life in a small cell, living in fear, but is it right to react the way many Americans have? Is it civil?

I was in first grade when I came home from school and saw the twin towers burning. I walked up my stairs and saw both my parents watching the TV with their mouths open. I moved closer to them, confused, and turned to see two buildings on fire. That’s all I remember of September 11, 2001.

It wasn’t until I was older that I found out what really happened. I was about 14 or so and I was watching a documentary on the Discovery Channel. They showed the towers falling, the people screaming, and they told me who did this horrible deed. The show told me who I was: an American. Seeing the towers fall hit me at the core; it was like somebody had punched me in the soul.

Every time I see something about 9/11, I get this rage that washes over me and I instantly feel like someone has to pay for this outrage to innocent citizens. 9/11 inspired me to become a military pilot and defend this nation, what it stands for and its people. I waited and heard his name for years: Bin Laden, the number one enemy of the United States of America. And I waited until it was my turn to hunt him down. I wanted to kill him with my bare hands, but then something changed. I started maturing and my dad began to tell me about the war and why we shouldn’t be there. I realized how right he was.

I hated the fact that we were in Iraq and Afghanistan. I added up the facts and figured it was pointless. We were, and still are, wasting young lives, sending this country into debt and making the rich richer by being there. How many families, friendships and lives have been torn apart and destroyed because the United States wanted one man dead? Osama’s death doesn’t change the fact that thousands of people are dead on both sides, many countries hate the U.S. now and the U.S. is in major debt. So my opinion on his death is that it’s nothing more than a morale boost for the soldiers who are serving in Iraq and Afghanistan and for Americans back home.

So, what will the death of Osama bin Laden bring? I think al-Qaeda is going to have a lot more trouble now that one of their masterminds and leaders is dead. I believe they will become slightly disorganized for a time and the U.S. military will take advantage of this and hopefully disrupt some part of their operation. But, eventually, they will get another leader–if they don’t already have a new one. Then, in my opinion, one of two things will happen. One: al-Qaeda will use Osama’s death as propaganda to recruit more people and get more resources and become much more powerful. Two: al-Qaeda will lose support, won’t get as many new recruits and will become rebels fighting the government of Iraq and Afghanistan. Both countries will become friends with the U.S., and life will be grand for the whole world.

My positive scenario may seem far-fetched, but I think it can be done if the U.S. starts building schools, hospitals, water treatment plants, etc. and stops bombing, shooting and killing anyone unless fired upon first, or unless they are clearly an open threat to U.S. troops. We can win civilian support in the major cities first and then move out from there. But we cannot build a government for them; that should be done on their own. It will take awhile, but if we let them do what they want to do, and have very few troops in those countries, I think it can happen eventually.

I believe my generation won’t be changed much by Osama’s death. He has already changed our lives. I’m not sure if it’s for the worse or better. My generation knows that the United States is not invincible, and that the major threat to the United States is not a country like Britain or Japan like it has always been. Now we know that a threat can come out of nowhere, use anything as a weapon of mass destruction and disappear. This makes trusting people difficult and makes minorities seem like instant threats to our lives in every dimension.

Without being able to identify any nation as being the enemy, I’m afraid life will become harder for minorities and being a “normal” American will be at the center of life: Having a college education, getting married, having 2.5 kids, a house in the suburbs and an acre of land to call your own. You know, the ‘American dream.’

We have already seen extremist laws emerge in Arizona and discrimination against Arabs is an open topic at airports and transit centers. I am afraid this will even lead to violent outbursts against minorities. I can see the most violence being in the South, especially on the U.S.-Mexican border, as Americans become increasingly outraged and openly violent towards minorities. I have no idea how to stop it, but I really think things will get much worse before they get better.

Osama bin Laden’s death is just another example of violence, and I predict the fear of an unknown enemy will continue to cause civil unrest. At a time like this, with such a long way to go as a society, I see very little cause for celebration.