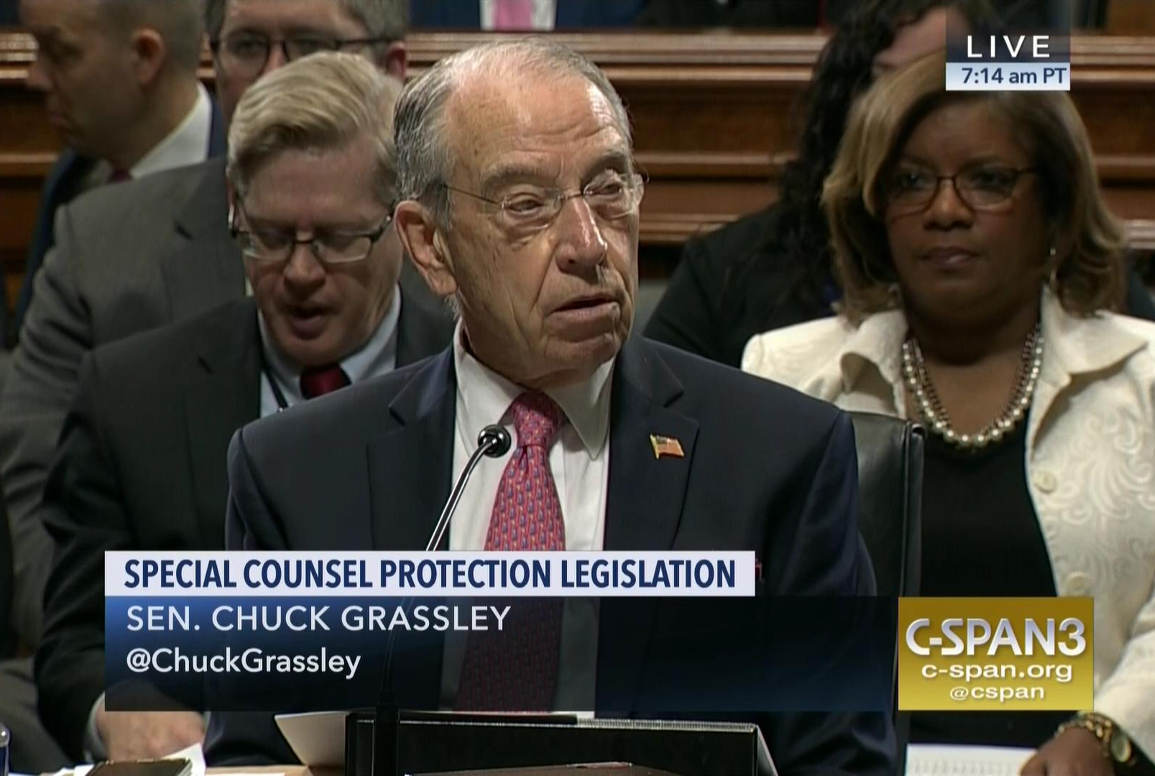 Chuck Grassley has been in elective office longer than most Americans have been alive. Since first being sworn in as an Iowa legislator in 1959, he’s continually been in power at either the state or federal level, but nothing in that long career has been as important as what he’s done as chairman of the U.S. Senate Judiciary Committee over the past three years.

Grassley has ignored long-standing Senate traditions to advance a conservative legal agenda — first, by undermining President Obama’s ability to appoint federal judges, and then by pushing through President Trump’s choices, even those with baggage that would normally kill a nomination.

In less than two years, Trump has appointed more federal appeals court judges than any other president since the current court system was created in 1891. He’s also appointed more judges to federal district courts than either Obama or George W. Bush had at this point in their presidencies. The effects of this will be felt for decades. And Trump couldn’t have done it without Grassley.

Many Iowans see Grassley as sort of an eccentric older relative. He seems endearing with his folksy grousing about the History Channel and his love of Dairy Queen (especially the one in Windsor Heights — “a good place for u kno what,” he called it in a 2014 tweet). That’s not how he looks to the rest of the world.

To them, he’s the angry 85-year-old, defensive and occasionally confused, who presided over the Supreme Court nomination hearings for Brett Kavanaugh. Everything Grassley did to advance Kavanaugh — even after documents Grassley tried to keep from public view indicated Kavanaugh likely committed perjury, and after credible allegations of sexual assault and the nominee’s ranting response to those allegations — is still vivid in people’s memories. But his other efforts to stack the federal courts with ideologically reliable judges who will deliver results Republicans want have gotten less attention.

Republicans started using extreme measures to stop the confirmation of Obama’s judicial nominees even before they took control of the Senate in January 2015. Then-Senate Minority Leader Mitch McConnell used the filibuster at an unprecedented rate to bring the appointment of even otherwise unobjectionable judicial candidates to a halt.

Grassley did his part, too. For example, he denounced Obama’s attempt to fill three vacancies on the U.S. Court of Appeals for the District of Columbia, the most important federal appeal court, as an illegitimate court-packing scheme. He insisted the court didn’t need a full complement of judges, and the three vacant positions should be eliminated. Judicial experts, including Chief Justice John Roberts, said Grassley was wrong. That had no impact on Grassley.

In response to the Republicans’ escalating use of the filibuster, Senate Democrats voted in 2013 to eliminate the filibuster for all appointments below the level of the Supreme Court. Federal judges were then confirmed at a routine rate, until 2015, when Republicans took control of the Senate, and Grassley took charge of the Judiciary Committee.

During Obama’s last two years in office, the Senate confirmed only 22 federal judges. That was the lowest number of judicial confirmations over a similar period in more than half a century.

The most famous example of Republican intransigence was, of course, the Garland nomination. Following the death of Justice Antonin Scalia in 2016, Obama nominated Merrick Garland to fill the vacancy on the Supreme Court. With 19 years on the federal bench, Garland had more judicial experience than any Supreme Court nominee in history. But McConnell announced the Senate would not vote on Garland’s nomination. Grassley took things a step further and refused to even schedule a single hearing on the Garland nomination.

Grassley claimed Republicans were adhering to an established Senate practice by refusing to consider a Supreme Court nomination during an election year. They weren’t.

But it wasn’t just a seat on the Supreme Court that Grassley held open for Trump to fill. Thanks in large part to Grassley’s efforts opposing Obama’s nominees, there were 112 vacancies on the federal bench when Trump was sworn in.

The promise of reshaping the federal courts with judges likely to rule in ways conservatives want was an important factor in Trump’s consolidation of Republican support. It’s a promise he’s kept.

Trump’s White House has been nominating judges from a list compiled by White House Counsel Don McGahn with the assistance of the extremely conservative Federalist Society. The emphasis is on finding ideologically reliable judges, not competent ones. But judging by how easy he’s made it for Trump’s nominees, Grassley appears untroubled by this.

Only amazingly unfit nominees, like Brett Talley, run into trouble with Grassley’s Judiciary Committee. Talley, a 36-year-old better known as a ghost hunter and horror novelist than an attorney, couldn’t even answer basic questions about federal law during his confirmation hearing. After the media began reporting on Talley’s history of online comments attacking Muslims, praising the founder of the Ku Klux Klan and making light of statutory rape, the Trump administration withdrew his nomination. (Talley, however, didn’t have to turn professional ghost hunter. Trump appointed him as an assistant U.S. attorney instead.)

But what happened to Talley has been the exception. Rated “not qualified” by the American Bar Association? Not a problem. Written things that most people would consider racist or sexist? Welcome to the federal bench. Publicly called a sitting Supreme Court justice a “judicial prostitute”? Enjoy your lifetime appointment.

Grassley has made getting controversial nominees confirmed easier by refusing to honor the century-old tradition of allowing senators to place holds on judicial nominations for openings in their home states, despite his promise to preserve the tradition in an op-ed published in the Des Moines Register in 2015.

It’s hard to overstate just how great an impact the federal judiciary Grassley has helped shape will have. Trump’s judges are younger on average than those appointed by previous presidents. They will be on the bench for decades, and able to strike down laws that don’t meet their judicial philosophy, regardless of how much popular support those laws have.

The people who have been selecting Trump’s judges admire a period of American judicial history called the Lochner Era. It lasted from the end of the 19th century until the mid-1940s, during which conservative federal judges repeatedly struck down socially progressive laws, including ones forbidding child labor or trying to prevent the sale of tainted food. The rights of corporations were more important than the rights of people.

That past is the future Trump’s judges — overwhelmingly white, overwhelming male — could help create. And that is the real legacy Chuck Grassley is leaving behind after decades in power.

Odds are, Paul Brennan will outlive Chuck Grassley, but Grassley’s influence on the federal courts will no doubt outlast them both. This article was originally published in Little Village issue 252.