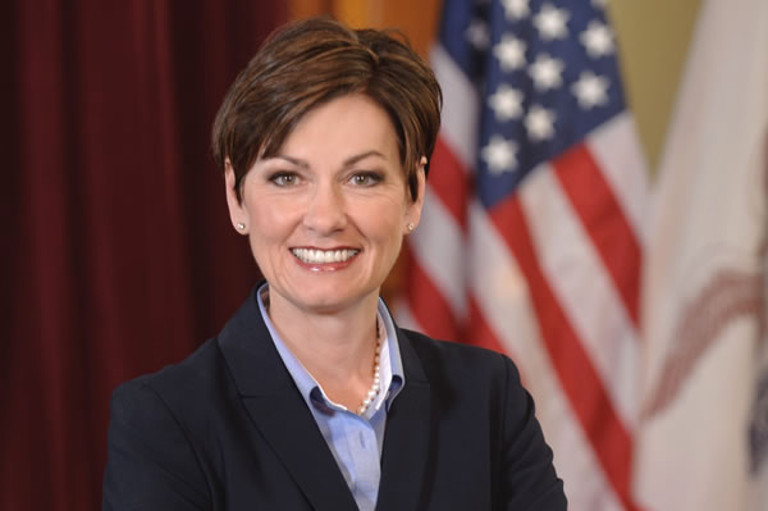 During her Monday press conference, Iowa Gov. Kim Reynolds came out strongly in favor of the American flag and against NFL players silently protesting during the national anthem. But judging by her remarks — which included references to respecting the military and those who died in the Sept. 11 terrorist attacks — it’s unclear if Reynolds knows why there are protests or anything about the players who are protesting.

Responding to questions from reporters about the “take a knee” movement — started in 2016 by then-San Franscisco 49ers quaterback Colin Kaepernick, some players have knelt during the national anthem to protest the killing of unarmed black men by the police, as well as other forms of police brutality and racial injustice — Reynolds spoke about the flag.

“Well, first of all, I was raised to pay respect to the flag,” Reynolds said. “That is a symbol that stands for the men and women, who have put their life on the line to protect the liberty and freedom that we have the opportunity to enjoy every single day.”

None of the players involved in the protests have objected to the flag, or suggested they oppose the U.S. military.

In an op-ed published in The New York Times on Monday, Eric Reid of the San Francisco 49ers, the first player to join Kaeperick in kneeling, said, “It baffles me that our protest is still being misconstrued as disrespectful to the country, flag and military personnel.”

We chose it because it’s exactly the opposite. It has always been my understanding that the brave men and women who fought and died for our country did so to ensure that we could live in a fair and free society, which includes the right to speak out in protest.

Speaking in Alabama on Friday, President Trump expressed a very different view of the protest. Like Reynolds, Trump mentioned the flag instead of the national anthem.

“Wouldn’t you love to see one of these NFL owners, when somebody disrespects our flag, to say, ‘Get that son of a bitch off the field right now, out, he’s fired. He’s fired,'” Trump said. “You know, some owner is going to do that. He’s going to say, ‘That guy that disrespects our flag, he’s fired.’ And that owner, they don’t know it [but] they’ll be the most popular person in this country.”

Following Trump’s comments, more than 200 NFL players engaged in various forms of silent protest during the anthem on Sunday.

Reynolds, who supported Trump during the Republican primaries, was more restrained in her statements than the president.

“While I respect the First Amendment, I just think it is so disrespectful to the men and women who have served, and I just would encourage them [the protesters], to get out there and do something,” she said. “Don’t take a knee. Get out there and make a difference. Engage, go into these cities. Run for office, support a candidate that you think stands for your beliefs. But let’s not disrespect the men and women who have served to allow us to have the freedoms and liberties each and every day.”

Earlier this month, Colin Kaepernick was honored by the NFL Players Association for his “commitment to empowering underserved communities through donations and grassroots outreach.” According to Sports Illustrated:

Kaepernick announced before last season that he would donate $1 million to various charities as well as all proceeds from sales of his jersey. He has donated to Meals on Wheels, a charity that gives suits to parolees and to famine relief in Somalia, among dozens of other charities.

Kapernick has also gotten involved in the community first-hand, hosting a “Know Your Rights Camp” in cities around the country to inspire youth and teach them about proper interactions with law enforcement.

At one point in her remarks, Reynolds switched from repeated references to U.S. troops to citing the victims of 9/11 as the reason NFL players should not engage in silent protests.

“You know, I just—I want to tell you something—I just got back from Israel, and I was over there during 9/11, and it’s the only other country in the world that has a memorial to pay tribute to the men and women that lost their lives due to the terrorism attack on 9/11,” Reynolds said. (In fact, both the United Kingdom and Italy have permanent 9/11 memorials, and many countries have held commemorations to remember the dead.)

And, you know, it was an American flag that was waving to the sky, with a piece of the Trade Towers in the base of the memorial [in Israel]. And one of the things that I can remember most from that horrific attack was the day that they draped that enormous American flag over one of the buildings that had been impacted. And that said to the world–that American flag–that we’re not going to be deterred, we’re going to continue to fight. We’re going to stand up for the liberties and freedoms for the greatest country in the world. And I think it was a uniting moment for Americans, all across this country and all across the world.

Reynolds also said she was worried about the impact the silent protests were having on children watching the games.

“I don’t think it’s teaching our young people, I mean I just … they look up to these individuals and I think it’s important that we respect the flag and what it stands for,” she said.

Prior to 2009, the NFL did not require players to be on the field and stand during the anthem. Teams routinely waited in their locker rooms until the anthem was over.