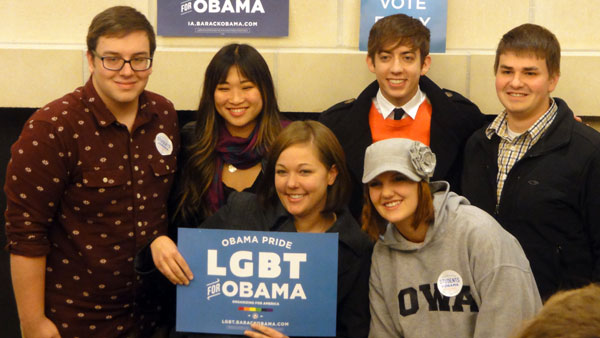 GLEE cast members Jenna Ushkowitz and Kevin McHale, appeared at an Obama campaign event Saturday morning at the University of Iowa Memorial Union. Both were energetically welcomed by thirty plus ‘Gleeks’ and Obama Campaign activists in attendance.

A native of Plano, Texas, Mr. McHale, was introduced to the small crowd at the Bijou Theatre as the “cutest nerd on television.” He noted with envy that his vote in the Lone Star State, and now in California doesn’t matter in the way that do votes cast by Iowans.

The pair posed enthusiastically for photos with fans and activists. Featured in the photo above are Quinn Powell, Ms. Ushkowitz, Jessica Jensen, Mr. McHale, Lilly Mescher and Adam Stokesberry. Ms. Jensen and Ms. Mescher are, respectively, UIowa Spanish and Math Education majors. Mr. Powell and Mr. Stokesberry have set September 21 as the date of their wedding in West Liberty. To the question, are you Gleeks?, the quartet responded “Oh heck yeah!”

An Obama operative interviewed on background informed me that the appearance of the two Hollywood celebs is part of Campus Takeover, an effort to encourage students to vote early. Later in the day the Glee stars travelled to UNI for a similar event, and then to Des Moines for a LGBT gathering.