G. Willow Wilson, one of my favorite authors, is coming to Iowa City to talk about my favorite superhero.

Wilson will give a free lecture at Hancher Auditorium on Oct. 8 at 2 p.m. titled A Superhero for Generation Why. The lecture is a part of Hancher’s Embracing Complexity series, which focuses on Muslim art and Islamic artists like Wilson, and also kicks off the Iowa City Book Festival, which runs through Oct. 15. It is also part of the One Community, One Book program sponsored by the UI Center for Human Rights (which focuses specifically on Wilson’s memoir, The Butterfly Mosque). On the morning of the lecture at 11 a.m., Wilson will do a signing at Daydreams Comics. She will also sign after her lecture.

Fans of her works — the novel Alif the Unseen, her memoir and her comics, which also include Air and Cairo — are sure to be as excited as I am at this opportunity to meet the author. From the very first issue of the reimagined Ms. Marvel comic, I was hooked. For the first time, I had found a comics character who is funny and who is relatable to teens like me while simultaneously being unique among all the other teen heroes around.

Kamala Khan, the new Ms. Marvel, is a Pakistani American, Muslim teen who fights to protect everyone with her compassion, sensibility and super powers.

Wilson is an inspiration to comic book fans around the world. She is a leading female comics writer who uses her platform to send a positive message and battle stereotypes about Muslims. I was lucky enough to speak with Wilson about Ms. Marvel and having a career in comics. 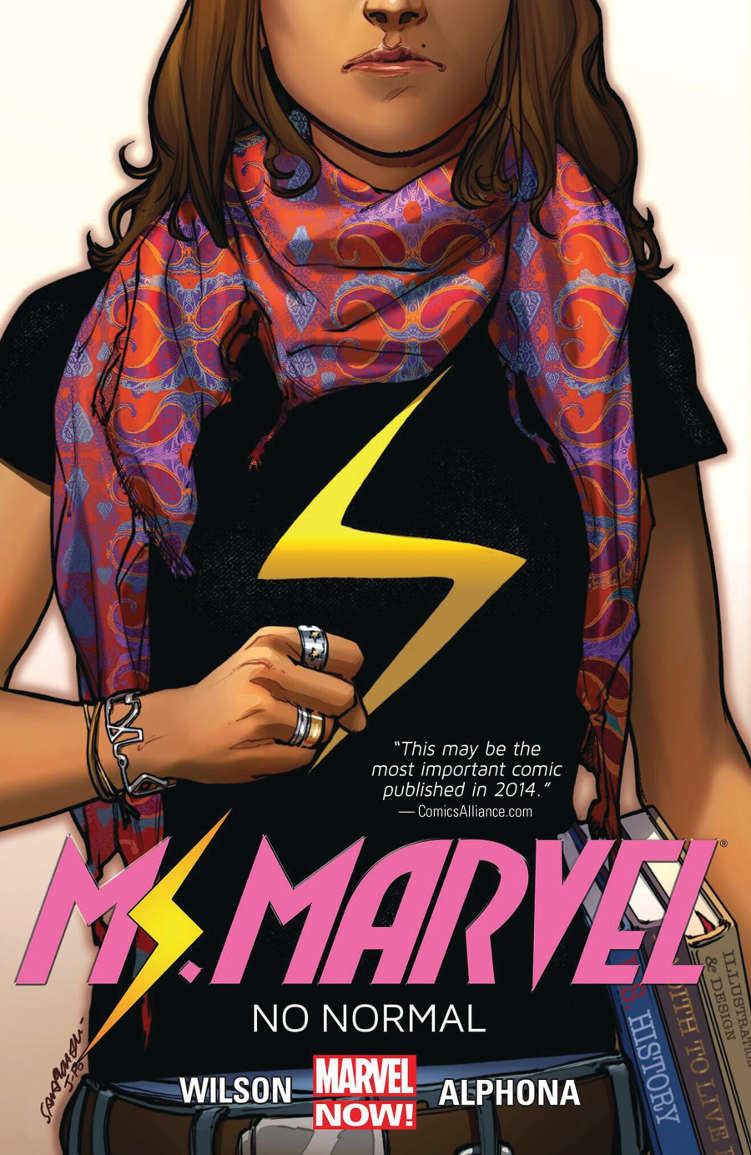 How do you think Ms. Marvel’s faith has helped her develop into the kind of hero she is?

I think there are multiple ways in which it plays out. One of them is really in the way in which she faces adversity. I think as far back as the second issue, the first time she has to save somebody who’s in danger, she thinks of her father quoting a line from the Qur’an — well, a line from the Qur’an that we sort of compressed for space — that says if you kill one person it is as if you have killed all of mankind and if you save one person it is as you have saved all of mankind.

So it’s really a reference point for her in terms of her ethics and her values, and I think that’s the way that we see it come through most often. When she has moments that are sort of like the classic Uncle Ben and Spider-Man “With great power comes great responsibility” moments, we see her sort of turning to her faith or turning to people of faith who are close to her in her life — her father, her brother, Sheikh Abdullah who’s sort of their local imam.

So, there’s that aspect and also there’s a cultural aspect, as well. When we see her celebrating holidays, when we see her with her family, at weddings, this kind of thing, the context is very much that of an American Muslim community, which I thought was important to highlight as well.

I can definitely see it when I read the books, and honestly that second issue is one of my favorites. What kind of impact have you seen Kamala have on young women around the world?

It’s difficult for me to judge the true reach of this character, simply because I kind of get responses filtered to me through Twitter, through social media. I do see that she’s having a much broader impact than I ever expected in terms of an international audience. I first envisioned this as a very local series. As you know, we’re very much a one-city series. We very rarely leave Jersey City; we use specific neighborhoods. So it’s very, very granular and very specific to this particular city. So, it’s really amazing to me when I get positive feedback from readers in Brazil — or, I just had reader just today from Singapore posting a cosplay that he’d done at a local convention there.

So that was a really unexpected bonus for me that I did not anticipate, thinking that this was going to be sort of a very small, very local type of series. And I can’t say particularly why that is. I think there’s a kind of magic there that nobody can predict or control in terms of by chance you’ve got the right character and the right story at the right time with the right audience.

What would be your advice to other women who want to pursue a career in comics?

I would say, first and foremost, start now. I think with comics there’s this sense that you need to sort of do other things first or come from some other publishing background or sort of come in through a side door. And I think we are at a point in the history of the art form where it’s begun to be taken seriously by the mainstream press — The New York Times, until a few weeks ago, had its own graphic bestsellers list. You can now take college courses on writing and drawing comics, which you certainly couldn’t do when I was in college and trying to break in.

So avail yourself of whatever teaching tools are available to you — at your local community college, or your local convention, or lit fest. And write scripts. Draw panels. Teach yourself as much as you can. Practice. You don’t have to wait for some big important story to come to you, you don’t have to sort of sit there hoping that inspiration will strike, maybe tomorrow, maybe the next day.

I think the way that you get proficient at comics, like any artform, is through practice. And don’t be afraid if the things that you write or draw turn out crummy day after day after day. That’s normal at first. So don’t be discouraged because one day, you will stop being crummy and start being brilliant. So you just kind of have to stick it out.

And then you get to your local comic book convention and meet your community, and you know, do the networking. There’s really never been a better time to get into comics since I’ve been in the industry. People are actively looking for new voices, and that works in your favor. It used to really be a handshake industry where you had to know people who knew people, but today there’s a real thirst, I think, for new stories, and that helps people who are trying to break in.

Jessica Cline is an 8th grader who lives in Cedar Rapids. When she’s not reading comics, she enjoys jumping rope with the Iowa Skippers, tap dancing, public speaking and jazz band. Her father is Rob Cline, Hancher’s Director of Marketing & Communications. This article was originally published in Little Village issue 229.