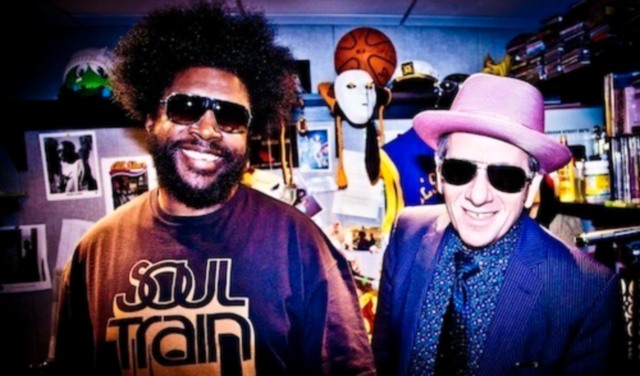 Although a few test pressings were released earlier this year on Record Store Day, for the general public, today marked our first chance to legally hear a track off an upcoming collaborative release by The Roots and Elvis Costello. The album, Wise Up Ghost, will be released by Blue Note Records on Sept. 17. The politically charged soulful jam doesn’t feature any raps from Black Thought, but ?uestlove’s drumming is more than enough to get fans excited about the perfection of this combination.

Most of the sessions took place in secret at Feliz Habitat Studios in the dead of night, while others were in plain sight at Costello’s Hookery Crookery Studios. Elvis described the record as “the shortest distance between here and there” and containing “both rhythm and what is read”. [?uestlove] says “It’s a moody, brooding affair, cathartic rhythms and dissonant lullabies. I went stark and dark on the music, Elvis went HAM on some ole Ezra Pound shit.”

The Roots, ever busy, are also expected to release their 11th studio album, & Then You Shoot Your Cousin, later this year on IDJ.