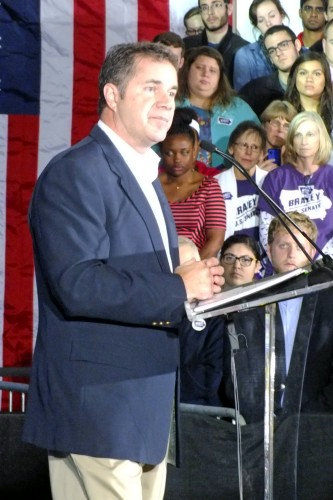 Possibly the biggest question ahead of a voter turnout rally for Bruce Braley was how or if First Lady Michelle Obama would address her recent and repeated flub of Braley’s name during an early October event at Drake University when she referred to Braley as “Bailey” seven times.

Mrs. Obama, reading from a teleprompter, joked about her gaffe and then pledged her allegiance to the U.S. Senate hopeful at an Iowa City event on Tuesday, Oct. 21.

She said mistaking names was not uncommon for her, explaining that she got her own daughters’ names wrong and even mixed up her husband with their dog Bo.

Before launching into her endorsement speech and pep talk for voter turnout, she said, “I may have slipped up on Bruce’s name a couple times, what I know I got right are Bruce’s values.” 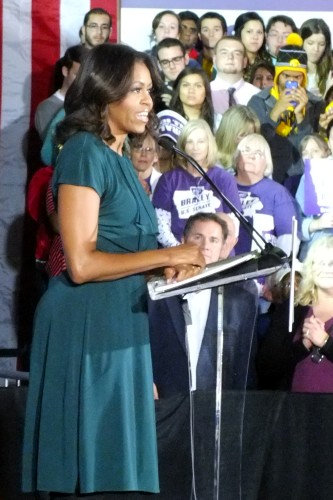 Mrs. Obama’s mission in Iowa City was clear, to motivate Braley’s core constituency and get out the vote. “Elections matter,” she said.

Before introducing Mrs. Obama, Braley, in a dead heat with challenger Joni Ernst, talked about meeting then-senator Barack Obama ahead of the 2008 Iowa caucuses.

Braley’s and Mrs. Obama’s speeches each ran just over 20 minutes.

Bruce Braley has served as U.S. Representative in Iowa’s first district since 2007. He faces Joni Ernst, a state senator elected in 2011 who also serves in the Iowa National Guard. The two candidates are vying for the U.S. Senate seat currently held by Tom Harkin, who will retire at the end of his term.