COMING in at 5:45 a.m. on Election Day, a sprited multi-generational team of ten workers worked well into the evening at Iowa City’s h Precinct 18 Polling Place at Longfellow Elementary School. Shortly after the polls closed in Iowa at 9 p.m., while Steve the janitor helped with clean-up of the school’s brightly lit gym, the team carefully filed the precinct results of the 716 ballots. The top two finishers for the presidential contest: Obama 524, Romney 123. 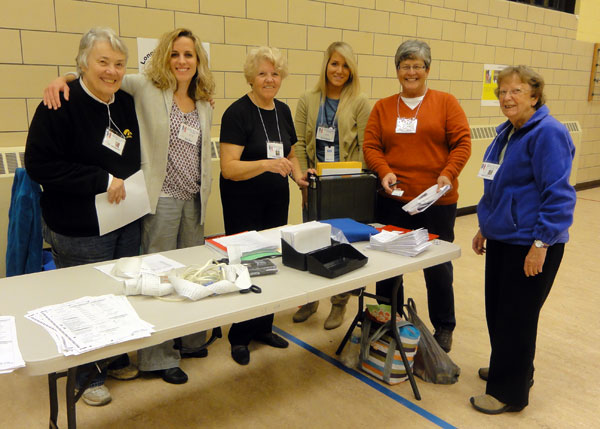 While two workers continued to meticulously recorded the write-in votes, the other six dedicated poll workers paused briefly for a team picture.

The results of the contest in Florida is still undeclared, with just 46,039 votes separating the two candidates out of over eight million cast, the final Electoral College tally is not yet available. Up-to-date presidential election results: elections.nytimes.com/2012/results/president