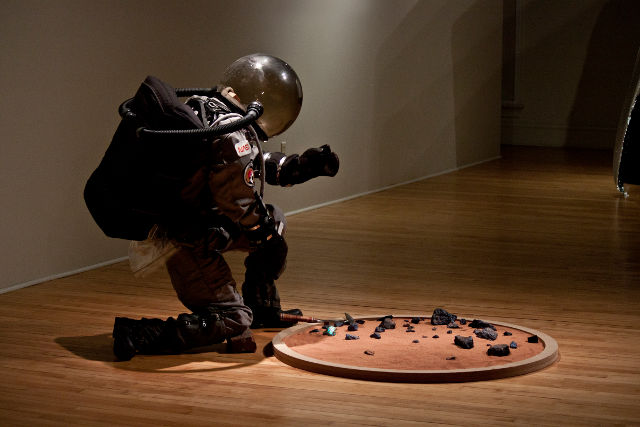 Marrying art and science is not a foreign concept: From Henry Fox Talbot and Thomas Eakins to contemporary artist Julian Voss-Andreae, scientists have utilized art as a medium of cataloging and documenting their discoveries for centuries. Taking a similar approach is Ian Etter, whose exhibit Manned Mock Mars Mission (MMMM) is on display at CSPS Legion Arts through June 29.

Etter acted as the journalist for the Mars Desert Research Station (MDRS) Crew 132 and recorded the experience. MDRS is where scientists and students occupy a self-sustaining, small environment in central Utah and simulate life on Mars to conduct research. In video footage of Crew 132, they all refer to themselves as living on Mars and refer to their past as “life back on Earth.”

Etter used his experiences with MDRS as fodder for creating his own solo Mars simulation in Iowa’s Loess Hills. In March 2014, he surrounded himself with cedar and canvas and isolated himself on the Iowa Prairie to study the soil and gain stimulus for his artistic endeavors.

Upon entering Etter’s exhibit, the first room contains only his space suit, adorned with a personalized iron-on patch that has his name, the name of his exhibit and his bearded face. The suit is kneeling over a circle of sand with dark black rocks that have a rainbow sheen.

Nearby is Etter’s wooden-tent — an angular structure that is covered in silver metallic insulation. Inside is a myriad of necessities such as a sleeping bag, stove, mirror, microscope and squishy packets of cheese spread. It’s a spectacular example of his personal scientific ecosystem. Although it’s hard to regard it as art, it is helpful to see his habitat to further understand his art, which resides in room number two.

These works illustrate where art seeps into science. To bear witness to Etter’s command of multiple mediums is astounding. They possessed strong scientific resonances, with pencil scribbles and color-coded notations or Latin terminology.

Most of the works made from paper had creases, fold marks and other signs of distress. Etter embraces these markings.

My favorite piece was “Deimos with Canals,” a haunting charcoal and digital print on paper, which depicts a moon with a gaping mouth. Nearby, the charcoal piece entitled “Supply Drop: Regolith,” displays Etter’s excellent command of charcoal and his ability to create highly textured terrain.

On my way out, a young girl walked up to me and grabbed the spacesuit’s arm and said, “Cool! What is this?” For an artist that actively partakes in the scientific research process, it’s no surprise that he’s igniting curiosity and stirring up questions.