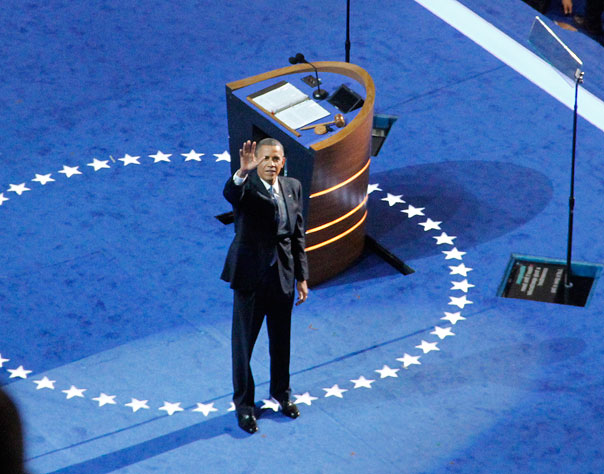 The 2012 Democratic National Convention concluded last night with a speech by President Barack Obama. No longer a promising, youthful candidate, the nominee, a now sadder but wiser battle-tested White House incumbent, effectively rallied the faithful in the Convention Hall.

The speech was not the peak moment of the evening nor of the president’s formidable oratorical record. Earlier in the program, former U.S. Representative Gabby Giffords’ faltering recitation of the Pledge of Allegiance had more than a few in the galleries in tears. Senator John Kerry’s rousing warm-up act had the best zingers: citing Romney’s characterization of Russia as the nation’s “No. 1 geopolitical foe,” the Democratic standard-bearer in the 2004 presidential elections declared the GOP candidate “stuck in a Cold War time warp.” He added:”Folks, Sarah Palin said she could see Russia from Alaska; Mitt Romney talks like he’s only seen Russia by watching Rocky IV.” Kerry also lit up traffic in the Twitterverse with the rhetorical question: “Ask Osama bin Laden if he is better off now than he was four years ago.”

The President’s speech did lay out the campaign ahead, framing the ongoing sizable economic challenges facing the country in an even larger existential landscape:

“But when all is said and done, when you pick up that ballot to vote, you will face the clearest choice of any time in a generation. Over the next few years, big decisions will be made in Washington, on jobs, the economy; taxes and deficits; energy, education; war and peace, decisions that will have a huge impact on our lives and our children’s lives for decades to come.

And on every issue, the choice you face won’t be just between two candidates or two parties.

It will be a choice between two different paths for America.

A choice between two fundamentally different visions for the future. Ours is a fight to restore the values that built the largest middle class and the strongest economy the world has ever known.”