Katie McGowan and Jon Winet are in Tampa to document the 2012 GOP National Convention. Below is their first dispatch. 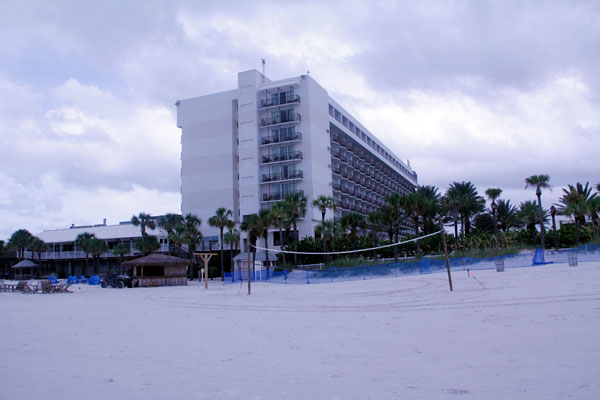 While waiting on the Iowa delegation during the day off, we head to Hilton Clearwater Beach to visit the New York delegates.

A group of volunteers welcome us to the hotel lobby. At a folding table they present flyers for local attractions, including the original Hooters restaurant.

Rowdy delegates and their entourages work to find a suitable alternative to their ill-fated beach party planned for Monday afternoon. Hurricane preparedness seemingly puts a damper on the party although tourists outside brave the waves.

Outside the hotel two local youth declare their disinterest in politics and the Convention, seconds before the more vocal of the two explains she is “all about Paul Ron” (sic).

A small group of their scruffy acquaintances gather to socialize. If we hadn’t been informed otherwise, this group would feel like a group of punks—kids who historically identify with left-wing politics rather than Libertarianism. Even during the last election cycle, I couldn’t have imagined kids in concert t-shirts and garish eye makeup discussing their concern over the national debt.

People in the know inform us that, “Ron Paul owned the weekend.”

As the rain relents, a police SUV rolls up and tells the small group of youth to leave the area. As the cop pulls away, they taunt him by name.