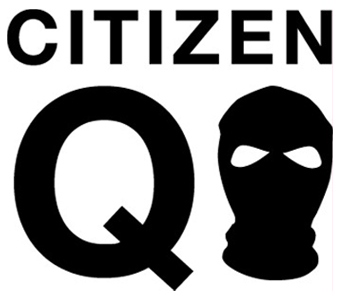 The serial radio drama was once the king of living room entertainment. Whether listening to Little Orphan Annie or CBS Radio Mystery Theater, audiences sat captivated in front of their radios each night to receive their spoken entertainment.

For Iowa City resident Chris Burns, the golden age of radio never died. Unfazed by the jaded generations raised on Hollywood movies and big-budget television programs, Burns set out to write, direct and fund his own radio drama—Citizen Q.

“The weirdest thing is why I never thought about this earlier,” Burns said. The series, described by Burns as science fiction noir meets American suburbia, premiered this Sunday on 87.9 FM Radio Iowa City, a local pirate station. With three episodes completed and another four to be recorded next week, Burns is quietly chipping away at his three season story arc. He plans to have the first season completed by winter.

Despite a medium that has largely fallen by the wayside, Burns has had little trouble soliciting talent. “You’d be surprised,” he said. “People are really interested in unique projects like this.”

Particularly interested was actress Rachel Brown who plays the part of Maggie Maggard.

“I grew up listening to Prairie Home Companion,” Brown said, professing her love for spoken entertainment. “I practically begged them to let me join when I heard they were doing this.”

Brown, who likens her character to “June Cleaver with a big bad secret,” struggled to describe her role for fear of giving away any of the plot twists—a conundrum shared among many of her cast-mates.

Actress Kristin Owens, who plays the roles of Karen Halstedt and Hilary Patterson, was deliberately vague in teasing the program’s plotline.

“We’re taking on a mind control mentality that exists in this society and turning it on its head,” Owens said, mentioning the sway large media and business corporations hold over American society. Her teaser, however, ends there.

For much of the cast, the draw of the twisting plotlines was matched by an equal interest in the medium itself.

“I think radio is still a very important medium,” Hagan Myers, the voice of lead character Jerry Maggard, said. “I think [Burns] is tapping into something that could see some sort of rebirth.”

“We’re on this collective journey together to create something memorable,” Brown said, describing the serial radio drama as a ”lost art.”

On the production side of the program, Burns said the medium presents interesting challenges that are “fun problems to solve.” With about five hours of post-production going into each show, Burns, who is aided by producer and sound engineer Luke Tweedy and sound effects engineer Nathan Jones among others, described the work as a learning process.

“We’ve always used our own sound effects,” Burns said, adding that the decision was not an issue of cost, but rather, creative control. There are a number of places where producers may go to find all the sound effects they could ever need according to Burns. “We didn’t want to go that route,” he said. Burns is taking this sentiment to heart. In the coming days, the Citizen Q sound crew will be visiting a firing range near North Liberty, Iowa to record gunshots for a forthcoming episode.

Though Burns is focusing on his immediate itinerary, he has long-term plans for Citizen Q—namely, to make the episodes available online so those outside of 87.9’s broadcast range can listen in.

“I’d love to get [Citizen Q] on iTunes,” Burns said, though he remains pragmatic. “Getting it on iTunes is one thing; having people know it’s on iTunes is another.”

In the mean time, those who missed the premiere episode of Citizen Q can hear the rebroadcast this Sunday, October 25 at 10:30 p.m., with episode two following at 11:00 p.m.

For the cast, it doesn’t matter if Citizen Q is heard via broadcast or streaming MP3, so long as listeners are entertained.

“Keep listening,” Brown said. “You will not be disappointed. Nothing is as it seems. Nobody is who you think they are.”

Wormwood: Already on its third season, Wormwood is a serial murder mystery program produced by Habit Forming Films.
Box 13: When novelist Dan Holiday takes out a classified that reads, “ADVENTURE WANTED! Will go anywhere, do anything. Write BOX 13, c/o Star-Times,” he soon finds himself taking on more than he bargained for. Box 13 originally aired in the late 1940s.