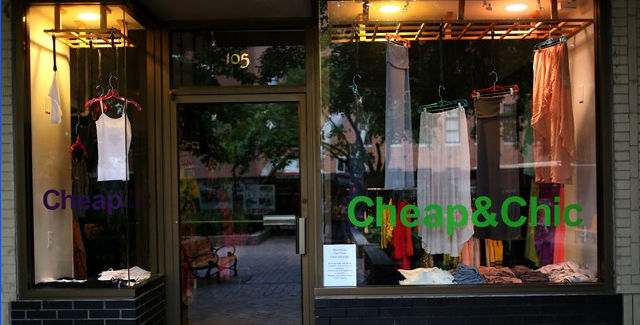 The high-end fashion brand is something of a rarity in the U.S., with just seven store locations across five cities: New York City, Miami, Houston, Las Vegas and New Orleans.

The store will remain locally owned by Champion, who also owns Catherine’s Boutique ( 7 S Dubuque St.). Champion considers the new shop an opportunity to expand service to young men, a demographic the shop owner called “one of the most requested categories of clothing downtown.”

“We’re getting into the young men’s business,” said Champion, adding that French Connection’s clothing is aimed at both college-aged men, as well as young professionals.

Liquidation sales at Cheap & Chic will begin Friday, April 25 and continue through June. Soon after it closes its doors for good, the store will undergo construction and is slated to re-open as French connection in late July, 2014.