A fine line exists between risque bar promotions and foolish ones.

With a recent promoted post on Twitter, Brothers Bar and Grill gleefully leaps over that line and finds itself waist-deep in “what the fuck are you thinking?” territory.

“Hacked shots of celebs are free. Redheaded shots are just $3. All three seem pretty cheap these days,” the post reads, alluding to the Aug. 31 theft of nearly 200 celebrity photos and national fervor that followed. The incident launched a nationwide discussion over the culture of acceptance, and rampant victim blaming, that permeates incidents of “leaked celebrity nudes.”

The theft prompted an investigation by the FBI’s Los Angeles office, and sparked a broader debate over whether the victims were to blame for having the photos in the first place — a sentiment that elicited disgust from many, including those in Hollywood.

Lena Dunham of HBO’s Girls wrote on Twitter, “The ‘don’t take naked pics if you don’t want them online’ argument is the ‘she was wearing a short skirt’ of the web.” Actress Emma Watson noted, “Even worse than seeing women’s privacy violated on social media is reading the accompanying comments that show such a lack of empathy.” 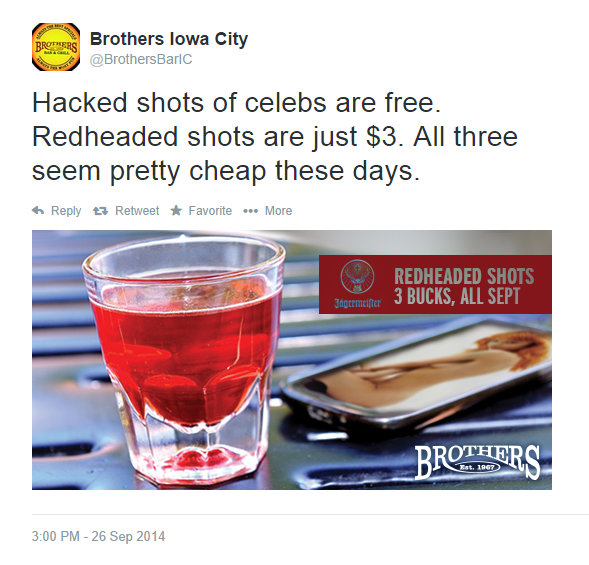 Brothers’ contribution to this discussion? These women — who watched as the world gobbled up private photos stolen from their private devices — are cheap, just like our drinks. The promotion is for a cocktail commonly known as a “Red Headed Slut,” no less.

Get it? It’s hilarious.

The Iowa City bar published the tweet on Sept. 26 as part of a nationwide campaign (identical promotions are featured at various Brothers locations across the Midwest), in addition to running the promotion on its Facebook page the previous day.

Brothers Bar and Grill’s corporate office, located in LaCrosse, Wisconsin, has not yet responded to Little Village’s requests for comment.

Incidentally, a bar patrol report released earlier this month by the City of Iowa City shows that more than a quarter of Iowa City’s underage drinking citations over the last 12 months were issued within Brothers Bar and Grill.

Who would have thought?