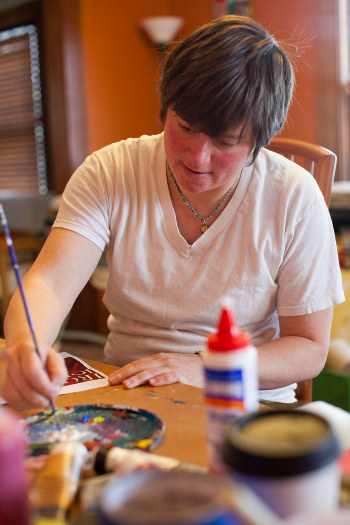 Just beyond a living and dining room of baby walkers and a collection of typewriters stands a 180 lb. fiberglass book, basking in Iowa City’s eastern sunshine. In the home of Lauren Haldeman, an artist in every sense of the word from her paintings on the wall to the paint in her fingernails, the massive sculpture takes up almost all of the space of her back sunroom.

The project–which will include 30 massive books throughout the Iowa City area–sprouted in recognition of Iowa City’s designation as a City of Literature. The statues will have a similar visibility to the 75 “Herky on Parade” statues placed throughout the city in 2004. 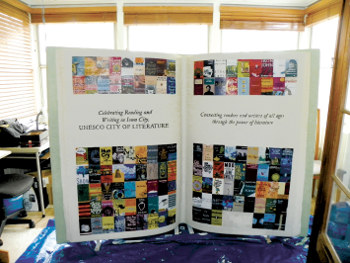 A native of Fairfax, Va., Haldeman arrived to Iowa City’s historic campus in the fall of 1997, eager to get her feet wet in a city with such a reputation for its writing and art.

“There was just nothing comparable to it on the East Coast,” Haldeman said. “I fell in love with it.” 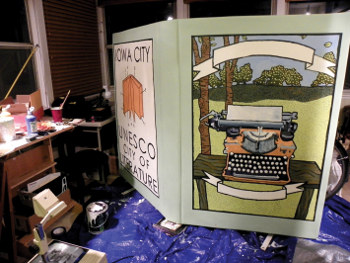 Find the finished work near the Coralville Mariott. Photo by Lauren Haldeman

Haldeman stayed in Iowa City after being accepted to the University of Iowa’s prestigious Writer’s Workshop, focusing on poetry.

“It was intense being surrounded by so many influences,” Haldeman said of her instructors and fellow classmates. “But it was an incredible experience.”

Fourteen years later Haldeman and her husband, Bill, a native Iowan, have set up their homestead in Iowa City’s historic east side. Her front porch has an eclectic collection of art and, inside, her love for typewriters (quite appropriate for the BookMark project) is apparent. 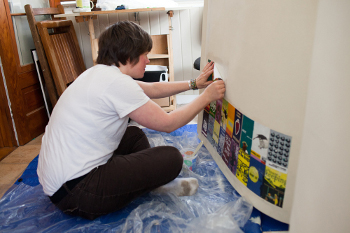 While Haldeman’s day job is as a web designer and editor for The Writing University, an online source of local Podcasts, journals and information about the university’s many writing programs and schools, her primary responsibility and apple of her eye is her 10-month old daughter, Eleanor, or “Ellie.”

“She loves it,” Haldeman said. She watches me through the windows and bangs on the glass.”

For the last two months, Haldeman has made the BookMark a primary focus. While balancing her daytime responsibilities and parenting with Bill, she reserves 7 p.m. to 9 p.m. every night–just after Ellie goes to bed–to concentrate on finishing her piece. She credits Bill as her backbone for taking care of Ellie while she juggles the project. Now she smiles in relief for the project’s impending completion and unveiling in June.

“I learned about some talent or facet of her artistic life that I never knew before,” Pilak said about Haldeman’s talents in poetry, graphic design, illustration, accordion playing, puppeteering and performance art. After the idea came into fruition, Pilak urged Haldeman to throw her hat in the ring.

“I knew she had the abilities, creativity, energy and shared love of the City of Literature, that it would be a good match,” Pilak said.

Standing in her sunroom, Haldeman’s eyes scan the book as she questions the color of the typewriter on the cover. Inside the huge open book are many tiny versions of published works from authors with ties to Iowa City.

“It was really neat painting these little covers,” Haldeman said, holding up her last three to add before her project is deemed complete. “It really made me feel more intimately connected to the authors and the books.”