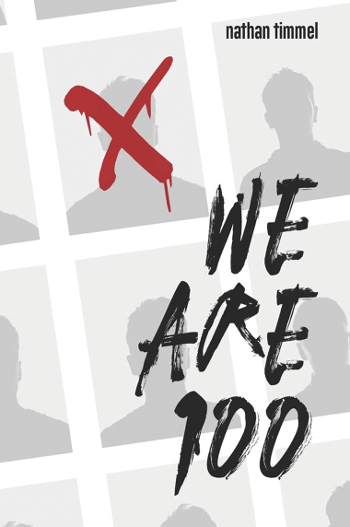 At the center of an otherwise tightly drawn plot, We Are 100 (Red Oak Press), the March 2021 debut novel from Iowa City comedian Nathan Timmel, there is a hole big enough to drive a truck through. A key element of the story hinges on the Big Bad’s ability to monitor the FBI as they explore the computer of one of his minions, through a piece of software that should have been wiped when the computer was destroyed before the crime. The perp who’s singing says it’s toast but offers to help another way — after which the FBI proceeds to his home and his computer.

I start with this because I know that some readers are likely to be put off by it. But I’m going to be dead honest: I didn’t care a bit. We Are 100 reads like a fast-paced action movie, and I likewise care very little about the plot holes endemic in that genre. I’d mention them in a review, sure, like I mention this here. But they don’t take away from my enjoyment. It doesn’t matter as a reader by what convoluted means the Big Bad gets his intel on the FBI agents; you still get that satisfying thrill when he uses it to toy with them. And We Are 100 is one satisfying little thrill after another.

The novel follows the story of Susan Chamberlain, a veteran FBI agent who keeps turning down promotions in order to stay in the field, and Michael Godwin, a rookie getting his first field experience under her wing. They’re investigating an explosion that they quickly learn is tied to a network of revenge-seekers all ready to go out with a bang to get back at folks who have hurt the ones they love. They’ve all been brought together by the mysterious Cassandra, who the reader discovers early on is an advanced AI being puppeted by Josh Hodges, not just the founder of The 100, but also a member.

There’s no mystery to We Are 100, per se. It’s more a fun game of cat and mouse. But what’s most compelling is the challenge of who to root for. The feds are cleverly drawn, with great characterization. But The 100 aren’t enacting petty revenge against everyday people. They’re taking out the people who you, the reader, want to see get theirs. One murders a prosecutor who refuses to pursue rape cases, including his daughter’s (who, it’s implied, later killed herself). Another kills a GoFundMe huckster who cashed in on the house fire that killed his family. And Hodges’ planned targets are the worst of the worst, leaving you with that unsettling feeling of hoping he succeeds as they all race the clock.

Timmel’s comedy chops are evident throughout, with adroit banter worthy of an X-Files episode. The pop culture references are a little much and tie it distinctly to its moment (Chamberlain’s obsession with Silence of the Lambs might hold up; the story about the Blockbuster she rented it from, not so much), but all told, it’s a deliciously fun page turner worth grabbing for your backyard sunbathing or vacation read. And it’ll make you think a little, too.

This article was originally published in Little Village issue 295.