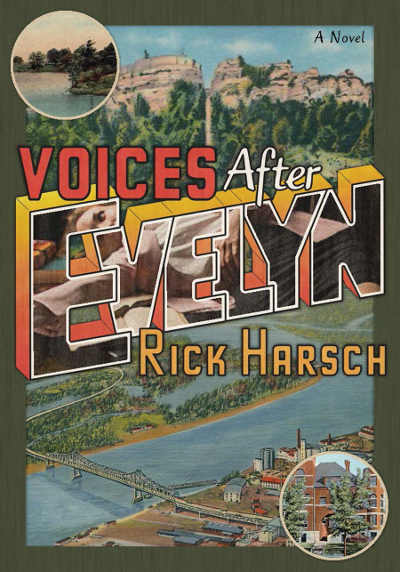 In 1953, La Crosse, Wisconsin underwent a traumatic cultural upheaval as the disappearance of local teenager, Evelyn Hartley, led to grief, suspicion and social unrest, en masse. Former La Crosse resident and Iowa Writers’ Workshop graduate Rick Harsh has turned that chaotic moment in small-town history into the speculative mystery novel Voices After Evelyn. Harsh gives voice to those locals who encountered Hartley in the years, weeks and days before her disappearance, across a series of fictionalized interviews — and, in doing so, reveals the seemingly pleasant town’s rotten, Lynchian underbelly one insightful and often upsetting conversation at a time.

There is a pulpy, noir-ish quality to Voices After Evelyn, due in no small part to the inclusion of characters with names like Mitzie Skumsrud and Judge Hamilton Swiggum. In fact, at times the prose is so thick with snappy, almost combative, banter that Harsh seems to verge on parodying the dialogue of some of the mystery genre’s most famous authors, especially Mickey Spillane.

Unlike a Mike Hammer novel, however, Voices After Evelyn isn’t confined to gritty reality. Harsch is more than willing to venture into the rarer air of magical realism in order to keep exploring Evelyn. The inclusion of a Greek chorus and the Vampire of Dusseldorf himself, Peter Kurten, do the respective heavy lifting of omnisciently tracking Evelyn toward her fate and commenting on the dispassionate nature of true evil, even during acts of savage violence.

In a bold, genre-defying move, Harsch collaborated with visual artist Julia Russell-Steuart to incorporate brief excerpts of Voices After Evelyn into a gorgeous and equally mysterious paper construct called a flexagon. The six-paneled 53 Lines bends, folds and reforms to reveal layers of previously hidden images and quotations from Voices After Evelyn. Russell-Steuart’s piece serves as a perfect tactile companion to the novel, adding depth to an already gripping story and finding real beauty in the face of something so awful and ugly as the disappearance of Evelyn Hartley.