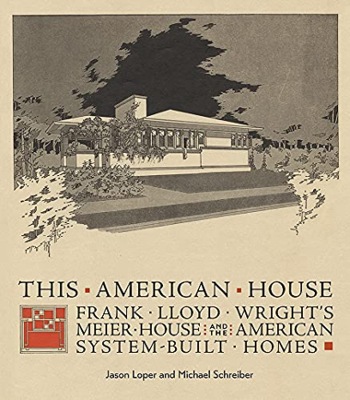 As a woman in her mid-20s who has dedicated her life to the arts, owning any sort of house feels like a fantasy, much less one with as much historical significance as the Meier House designed by Frank Lloyd Wright in Monona, Iowa. But even for a person who doesn’t know much about architecture or house ownership, This American House: Frank Lloyd Wright’s Meier House and The American System-Built Homes (July 2021, Pomegranate) was a satisfying and informative read. Authors Jason Loper and Michael Schreiber invite us into their process of finding the Meier House, falling in love with it and chronicling its history in a way that will even entertain readers who thought Frank Lloyd Wright was famous for airplanes or something.

Originally, the Meier House was a part of a series of buildings in Wright’s American System-Built Homes (ASBH) plan to “bring high-quality architecture to the homeowner of moderate income.” The plan did not have the longevity Wright hoped it would, but it did leave behind houses to carry on the legacy.

By the time Loper and Schreiber got to call the Meier House their home, it had already been home to several families who had taken on the act of “finding the right balance between Wright’s design goals and their own life patterns.” This book includes those stories as well.

On its face, This American House appears much too short to provide the information it does. But in fact, it tells the comprehensive story of the Meier House starting first with Frank Lloyd Wright, then the families that stewarded it before our authors moved in in 2013.

Mixed with first-hand accounts from past residents are pictures of other Wright houses of similar eras, blueprints and side-by-side comparisons of the changes made to the structure over the years. Breaking the book up in this way makes it digestible for visually minded readers.

Utilizing these images also allows the book to progress organically. While the authors do rely on some architectural jargon, it isn’t heavy-handed, and the visuals help round out the story for readers who aren’t familiar with the terms used.

This American House is not a story about Wright, the previous families who called the Meier House home or even the authors. Instead, the house itself emerges as the main character. We learn about the changes it’s been through, the reason it was built in the first place and the interesting history it brings to Monona, and Iowa for that matter.

By telling the story of the Meier House, Loper and Schreiber also remind us of the stories happening around us. History isn’t just made by loud people who fight in wars or invent machines, sometimes it’s made by humble families building a life in a hidden gem of a house hiding in the rural Midwest.

On Feb. 5, Loper and Schrieber’s hard work was nationally recognized when the book earned the 2021 Silver Design Award for Historical and Biographical Books at the PubWest design awards held in Denver, Colorado. Whether you’re a homeowner, an architect or just a proud Midwesterner, This American House might be just the book you’re looking for next.

This article was originally published in Little Village issue 304.