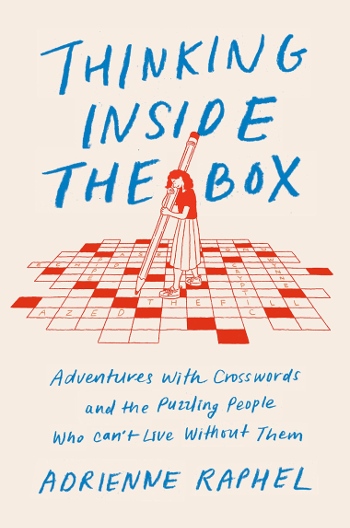 I love to tell people that I want to learn everything. When I was asked to read a book about the history of crossword puzzles I thought, “well, that’s not a topic I would have picked,” and agreed.

When the first page told me that the crossword puzzle was invented in 1913 I could not imagine how this book could possibly be over 300 pages. I ended so consumed by Thinking Inside The Box (Penguin Press) that I was disappointed when I realized I only had three pages left.

Thinking Inside the Box, by Writers’ Workshop alum Adrienne Raphel (out March 17), is a lot of things, but it is not at all inaccessible or esoteric. I don’t do crosswords; I had to look up a lot of words. (Did you know people who like crossword puzzles are called “cruciverbalists”?) But there was something immediately welcoming both in Raphel’s voice and in her content. This felt less like a history lesson and more like being invited into a friendly subculture where everyone brings snacks.

In the third chapter Raphel drops the confines of third-person narration and introduces herself to the audience like she’s been waiting to let us in on a secret. We meet Raphel at a writing residency in the Berkshires where she is slaving over construction of her own first crossword. This is the first time Raphel states that she is not a crossword person, but comes from a family of puzzle and game lovers. It’s almost meta-level narrative when she describes creating her own crossword puzzle or going on a crossword cruise as Raphel insists that she is not on their level; meanwhile, she has lovingly crafted a treatise to honor the puzzle and those who love them.

The beauty of this book is how accessible Raphel made crosswords to someone so outside of the world. She discusses their role in World War II; crossword puzzles in popular media; the work being done to address gender, race and class inequality in the puzzle world; crossword puzzle vacations and tournaments; and how crosswords are used in medicine. Raphel interviews big names in puzzles like Will Shortz and attends the American Crossword Puzzle Tournament (where she amusingly finds herself tailed by her parents).

While I really loved this book, there were moments where Raphel missed her own blindspots. In addressing how crossword puzzles are often used to signal intelligence, yet have historically been more accessible to middle- and upper-class people, she doesn’t spend much time discussing the consequences of this gatekeeping. When describing a rift between the old guard and new (during the Oreo Wars!), she uses the term “the Young Turks” for the new guard (a term that even the journalism group of this name has apologized for using and changed their name to initials).

Still, she goes to great lengths to show moments in which the crossword has brought people together, helped memory patients and caused military security issues. Thinking Inside the Box is an educational romp; it inspired me to try the first crossword puzzle of my adult life and, more than anything, it is a love letter written by a poet to the 100 years of cruciverbalists who shaped her world.