The Pawn of Isis 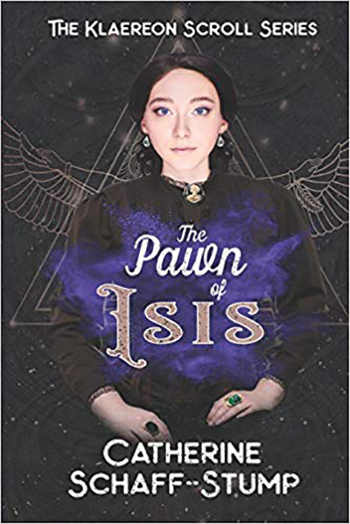 The year is 1842, and powerful families control the magical resources of the world. This is the setup for The Pawn of Isis, the second of five books in Iowan author Catherine Schaff-Stump’s historical fantasy series, Klaereon Scroll. The story encompasses treachery, betrayal, politics, love and self-sacrifice.

Each magical family has a special talent. Foremost among them are the Klaereons: They are tasked with protecting a mystic scroll and enforcing the exile of Egyptian gods to the Abyss where they have been banished. Five years ago, Octavia Klaereon and her sister Lucy fought to keep the Egyptians from freeing themselves, and Lucy imprisoned the god Ra at the cost of her emotions. Now she is flirting with madness, and Octavia is in danger from her own family.

Five years after falling in love with and being rejected by Lucy Klaereon, Carlo Borgia, heir to the Venetian Borgia’s magic, goes to England to prevent Lucy from marrying vicious Atreus Galt. When Lucy does decide to reject her current suitor, Galt retaliates with a series of strikes that will ultimately trigger Lucy to respond with drastic action, unintentionally endangering the world. Only Carlo and Octavia can help Lucy regain her sanity and set the balance right.

The author does a wonderful job of evoking 19th-century Europe and its variety of cultures and peoples. The magic in the story is drawn as an integral part of the world; it is not movie magic, but the fabric into which everything is woven, creating a larger enchanted cosmos. Humans are shown as complicated and fallible, capable of doing terrible things, but also capable of heroic actions. The Pawn of Isis is a strong addition to the Klaereon Scroll series, and the ending’s unresolved elements promise an equally exciting sequel.

This article was originally published in Little Village issue 263.