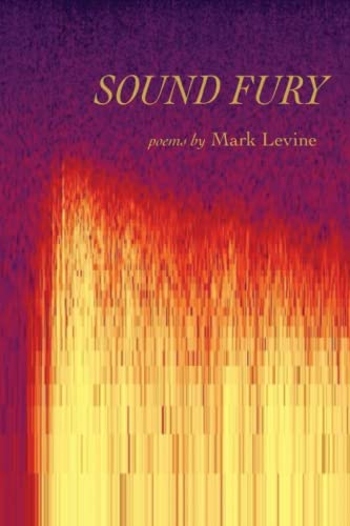 Things not to do: read Mark Levine’s Sound Fury while battling a nasty rhinovirus. Here’s why: Levine (deftly) uses so many literary devices simultaneously that one really needs the full use of their faculties to experience Sound Fury (University of Iowa Press). In my first round of reading, while sick, I thought I’d be compelled to warn that a book of poetry like this is for well-read intellectuals, people with encyclopedic knowledge of poetry and ships and religion and workers’ rights — but that didn’t turn out to be the case. I did have to use a dictionary. A lot. But a cleverer reader than me would have read the notes that Levine left stating that many poems are inspired by the work of Robert Herrick, a 17th century cleric and lyric poet, and Alexander Pope. This is probably the most background information necessary for getting into the weeds with Levine’s heady new book.

These poems are interested in identity and the way that both sound and story — culturally accepted myths and nursery rhyme — influence us. They investigate the domestic on a macro level and pop-culture on a micro level. Somewhere between the double-entendre of nearly every title and the exacting internal rhymes and you can’t help but get lost in the matrix Levine builds, line by line. Levine flirts with intertextuality somberly but joyfully with responses to Robinson Crusoe (“Without Robinson”), Robert Herrick (“His Poetrie His Pillar”), Zane Grey (“Zane Grey”) and surely more than I can parse out in the book’s anchoring opus, “Dire Offense,” which is 12 pages long and is a sometimes tongue-twister, sometimes documentary.

Worried for my own brain fog, I started to read the poems aloud and I want to urge all readers to do so. There is a magic (not unlike reading Dr. Seuss’s Fox In Socks if reading that book made you feel like an intellectual) in the way the the words move around the mouth, for example, from “Dire Offense,” “The EMTs are on him; but their art / Is no match for a bastard’s flatlined heart. / Time Fate Love Beauty Power Ill-Nature Steel / Muse Goddess God Jove Neptune Hermes Sol / Ulysses Dido Proculus Propitious / Megrim Maeander Cynthia Thalestris / Sylph Sylphid Nymph Gnome Zephyretta Umbriel / Fay Fairy Pam Poll Ixiom Ace Ariel / Brilliante Damon Dapperwit Clarissa / Sir Plum Sir Fopling Florio Crispissa / Belinda Betty Basto Partridge Spleen” this list of mythical characters goes on and slowly adds adjectives and qualifiers, and is followed by “Playing at violence with sharpened sticks is delaying / Onset of incipient male horror, saith the experts. Once at / Recess on the dirt patch, you see, our boy wrests / Weapons from beneath his blouse, shouting.”

I think I could revisit poems like “Bantam,” “Los Toritos” and “strange shadows on you tend” daily and get something new from them. There are poems anchoring this book to Iowa City (“Auto”), poems on workers’ rights (“On Himselfe,” “Cape Cadaver”) and poems about marginalized people in general (“Poririo Diaz,” “The Vine”). This dance between sounds and imagery creates a depth in the poems that I wasn’t prepared for and I am excited to revisit this volume (and Levine’s other work) with the time and insight they deserve.