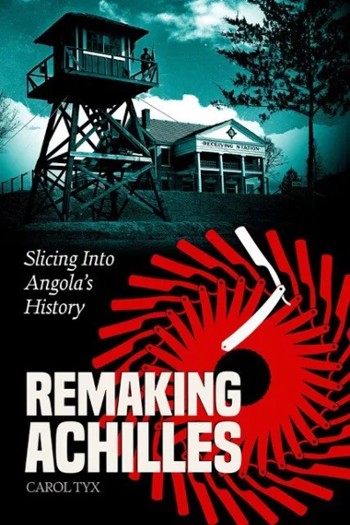 Ordinarily I read one poem in a collection at a time and digest — give each piece special attention. Remaking Achilles (Hidden River Publishing) is different. I read it in one sitting. And then I read it again, sure that with a second read I would find some solution to the questions it raises.

Written by Carol Tyx, a professor emeritus of Mt. Mercy University who runs a book club at Anamosa State Penitentiary, Remaking Achilles could not have come at a better time. As the U.S. (with support from protesters around the world) erupts with demands for racial equity and an end to police brutality, I found myself inside a painful, prescient narrative of the early days of the prison-industrial complex.

With an obvious understanding of poetic form and narrative, Tyx lays out a history in chronological order, using direct quotes and found poetry from her subjects to make this story tangible. Her poetry speaks for key players in Angola State Prison (in Angola, Louisiana; the inspiration for private, for-profit prisons) from 1844-1951, centering on a series of events in 1951 in which inmates cut into their own Achilles tendons in order to avoid the labor they were assigned, which led consistently to torture and often to death.

The inmates whose exact words Tyx interweaves in italics frequently quote prison staff threatening them with death. In the poem “William Richardson Reading Hamlet In Charity Hospital, New Orleans,” Richardson gives three separate instances of such threats before the closing stanza: “I am twenty-two, ten months left on my 18-month sentence / for trying to buy an ounce of marijuana — which by the way / is easier to get in prison than out / I didn’t know if I was going to wind up stick-simple / from getting beat on, or scalped, like some I saw / or dead. What good would a parole do then?”

While Tyx explores the spectrum of humanity when faced with cruel reality, she’s also forcing a mirror to her audience. The injustices the inmates faced in 1951 are still happening. One of the first poems, titled “How To Make A Plantation Prison,” reads like a leaked instruction manual for police departments in 2020 that could end up on a protest sign, “When more than a hundred prisoners die in a year, / increase arrests.”

(These men wanted proper toilets and not to be murdered. How much has the prison system really changed since then?)

Part of this book’s effectiveness is in the building of the full narrative (making it tricky to tease out many representative quotes). The reader gets hooked on a spectacle of cruelty, only to find that there are no good intentions among those in power. But there are heroes here among both inmates and the “free.” Journalists battle with politicians while clergy and medics beg wardens for mercy.

The volume ends on a high note — “they named me / Achilles. Best name I ever been called”—but the book is enduringly haunted.

Seventy years from the rebellion, I can’t feel certain that any of the reforms eventually granted to Angola were enough. Tyx’s painstaking research is obvious, immersive, unavoidable and functions as a call to action. May hindsight grant change.