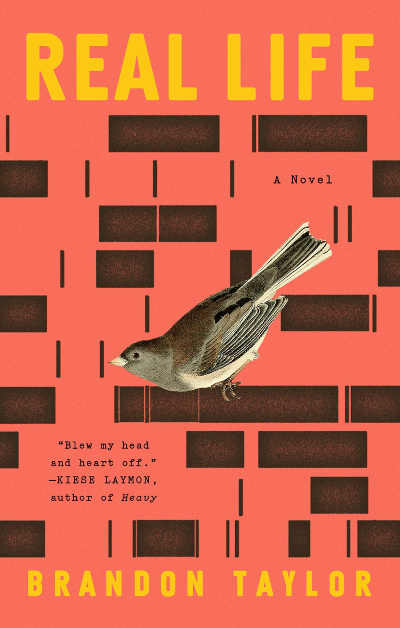 In his debut novel, Real Life, released Feb. 18, Iowa Writers’ Workshop alum Brandon Taylor follows the story of Wallace, a science graduate student in the Midwest who is in search of what he really wants. The book is set over the course of just three days, and it’s filled with betrayals, new romance and self-discovery.

Taylor paints his narrative with a palette of themes that include relationships, grief and trauma. At the start, readers see Wallace several weeks after his father died, believing that he is doing fine, not experiencing the expected stages of grief. That feeling seems to stem from the fact that his upbringing was spotted with tragic moments, many with his parents at the center.

Wallace is a recluse and tries to be alone much of the time, but after he is roped into spending time with his estranged fellow grad students, he gets into both high-tension drama and romantic entanglement.

Wallace finds his studies, friends and life in question when he is faced with trying to find what he really desires out of them all. Throughout the novel, Wallace keeps his emotions in check, fearing that if he loses control of them, it could threaten his place as the sole African American in his graduate program.

Real Life tells a truly distinct story about a gay black man from Alabama who attempts to escape his trauma by way of academia. With this fresh perspective, the novel finds its strength in showing the way people try to distance themselves both from their past and from others.

Wallace’s journey is colored by drama, betrayals, but most of all, the feeling of wanting to live a “real life.” The theme comes up frequently in the novel, with the grad students often lamenting how much easier things would be if they didn’t have a life in academia and instead worked and lived like “normal people.”

The characters’ tense exchanges in Real Life always begin with mundane social interactions, before building to a dynamic, cruel argument. The exploration of cruelty is one of the most remarkable elements of the novel — Wallace describes friendship as an exchange of cruelty between two people.

Wallace’s world view is clouded by past trauma, and the novel shows how that causes him to go down a road he never would have otherwise. Real Life is a compelling social drama adeptly complemented by Taylor’s prose. I’ll definitely be keeping an eye out for his next novel.

This article was originally published in Little Village issue 279.