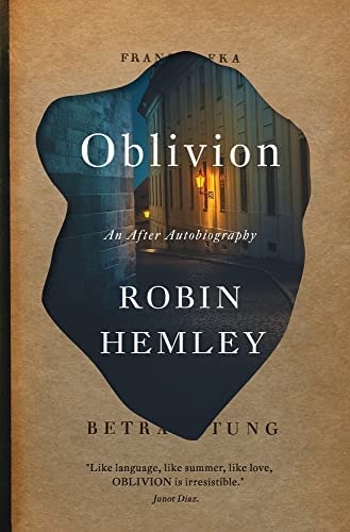 What to say about Robin Hemley’s Oblivion? The University of Iowa Writers Workshop alum’s 16th book was released this year on Gold Wake Press. And although it’s short in pages, the novel is not short on big ideas.

Oblivion follows a nameless writer who dies and passes into The Cafe of Minor Authors in the realm of Oblivion; a purgatory for authors who could never quite make it to greatness. Here, our narrator meets Jozef, a guide who allows him to peak into the lives of his ancestors and his literary role model: Franz Kafka. Soon, our narrator learns that he has a chance to escape The Cafe of Minor Authors if he writes something worthy of transcending Time. But he must beware, if he spends too much time in a certain place, he will become a dybbuk and be trapped forever.

As interesting as the premise is, plot-driven readers should beware. Intermingled with our narrator’s journey to writing something that will help him escape Oblivion, is a whole lot of contemplation on ego, ancestry and writing, of course. Throughout the novel, Hemley delivers carefully crafted paragraphs that meditate on the solitude of artists. Specifically, how the narrator became so obsessed with his own self-image, that he is still chasing his masterpiece even in death. The result is a cerebral and melancholy tale that reads like a warning. Maybe even a parable.

Or perhaps you could call this novel an “idea story,” like the ones that the narrator describes one of his graduate school professors despising. “Idea stories” are stories that use narrative to describe a bigger truth. As Hemley writes, “Narrative illusion, no matter how well done, is artifice, after all, written by someone with ideas. Some of us like to coax ideas out of hiding, suggest that they should just be themselves. For such writers, we have essays, but some of us want both ideas and narrative.”

Oblivion fits this description to a T. Not only are we handed thoughtful reflection on the solitude and continuous pain of artists; we are then given space to contextualize it in a beautiful fictional setting with characters we care about and cappuccinos that never get cold.
Admittedly, I’m a plot-driven reader. And even though this book is full of tangents and world-building, there was enough forward momentum to keep me interested. By the end, our plot is wrapped up in a bittersweet bow and we’ve enjoyed getting to know our narrator’s intimate thoughts on his life, death and art.

Overall, this book is balanced well. Even in the most severe moments of the novel, there are small oases of humor scattered through. Whether it’s the seemingly pointless pleasantries exchanged between dead authors or unhinged sights our narrator experiences as he peers into the lives of his ancestors, Hemley doesn’t ever let us wander too far into reflection that we forget to come up for air.

Oblivion is the perfect novel for readers who like to think, readers who are interested in creative speculations on the afterlife or readers who just enjoy a little magic. If you’re a fan of “Midnight in Paris” or The Metamorphosis, this 2022 release might be the perfect addition to your shelf.