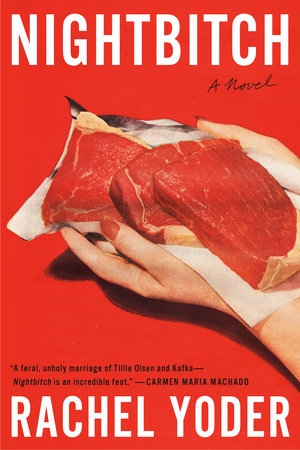 I think I need to open with an admission of guilt: I am not a parent. I have been a nanny, a preschool teacher, I’ve worked in youth housing — this is to say, I have helped to raise children of all ages, but I am not a parent.

So while reading Nightbitch (Doubleday) I found myself wondering, “What if all mothers turn into mythical creatures, a secret they keep from the rest of us?” I have always had this reverence for people whose bodies open up and brand new bodies come out. It makes sense to me that those bodies hold secrets.

For those unfamiliar with the phenomenon Nightbitch has already borne (a movie deal before publication, even!), a quick synopsis: Artist turned stay-at-home mom transmogrifies into a dog as her identity fades into motherhood and away from self.

It is obviously more than that. First and foremost it is weird. I read passages aloud to whoever was near me and for those outside the literary world, the response was, “So, this is the type of thing you read?” This struck me as one of those phrases people employ when they don’t know how to respond, like “interesting.” But Nightbitch is interesting. It is one of the most interesting books I’ve ever read. For at least half of the book no characters have names, dialogue isn’t demarcated in any way, the mother is, significantly, only called “the mother.” No capitals, no fanfare — just “the mother.”

Part horror-confessional, part dadaist satire, Nightbitch is amazingly accessible. Offering a prayer in solidarity with other mothers, author Rachel Yoder addresses the cult of motherhood and productivity; of those perfect happy mothers who are impossibly put-together and also always involved in pyramid schemes; and the great isolation that comes from being a stay-at-home mom. Mothers aren’t allowed to be unhappy, to seek fulfillment outside of the home; the work they do “isn’t real work”; they couldn’t possibly be less than happy.

“How could we possibly long for something beyond our offspring? … It’s almost as if having a child does not sate a deep yearning but instead compounds it,” the mother writes in an epistle. But it’s complicated. “At times she terrified herself, wondering if she was a god, if being a mother was one way of being a god.”

What I liked best, though, was the absolute humanity in moments like this: “This must be what it means to be an animal, to look at another and say, I am so much that other thing that we are part of one another. Here is my skin. Here is yours.”

This article was originally published in Little Village issue 297.