Near the Exit: Travels with the Not-So-Grim Reaper

Reading: Lori Erickson, Near the Exit 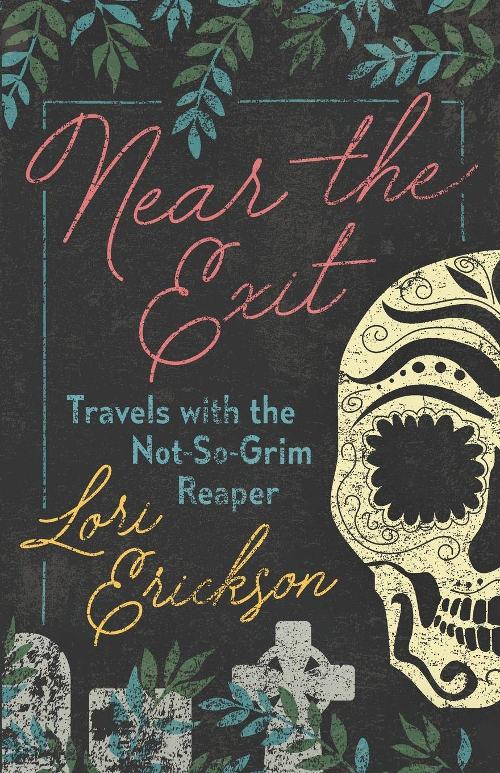 Life as a travel writer and spiritual itinerant was jolted, for Lori Erickson, by the sudden death of a brother and the precipitous progression of her mother’s dementia. Seeking in part to cope with the proximate loss and to recalibrate her own spiritual equilibrium, Erickson looked anew, far and near, upon death. She invites us to join her in travels to the edifices of ancient cultures, including the Great Pyramids of Egypt, the Templo Mayor of the Aztecs and the Mayan burial chambers at Palenque, where she observes, contemplates and dialogues with spiritual guides and shamans.

Closer to home, she takes our hand, with subtle insistence, and guides us into locations in our contemporary society — nursing homes, graveyards, funeral homes, cremation pyres — in death’s proximity, where she dialogues with cemetery visitors, morticians, Buddhist monks, historians: just about anybody who is positioned and willing to offer their insights into end-of-life concerns.

Near the Exit collates chapters by topic, alternating between death-dealings in ancient cultures and our contemporary beliefs and customs. The organization is effective, pacing the text and shifting the focus, enhancing the educational and entertaining merits of the read. Erickson writes with insight and humility, with a gentle touch of humor, in a manner that disarms what could otherwise be an unsettling and sober topic.

Subjects are researched; the expertise of other leading writers in discourse about death, such as Cynthia Bourgeault and Kathleen Dowling Singh, are acknowledged and quoted. The tone of the text is Buddhist, perhaps being more observational, accommodating and accepting than the notions about death that prevail today among western religions. Her contemplations are a swell of wisdom, what the Maori of New Zealand would no doubt regard as manna. The effect is to open metaphorically the dark closet door of death and invite her out into the light, out onto the page.

In addition to journeys to ancient cultural sites and visitations to end-of-life community settings, Erickson has the courage to travel in a third direction: inward. She shares her initially fraught return to the practice of meditation, with the intent of exploring and more deeply contemplating death. These meditations, as well as the meditation practices of others, remind us that one day, maybe not so far in our futures, our possessions, cherished activities and even our closest sentients will fall away. From a spiritual perspective, these realizations are liberating; to grasp the earnest sense of Erickson’s Near the Exit is to disempower the Grim Reaper, to relegate her (the Reaper, not Erickson) into the natural order of things, from the cosmic to the deeply personal.

This article was originally published in Little Village issue 269.