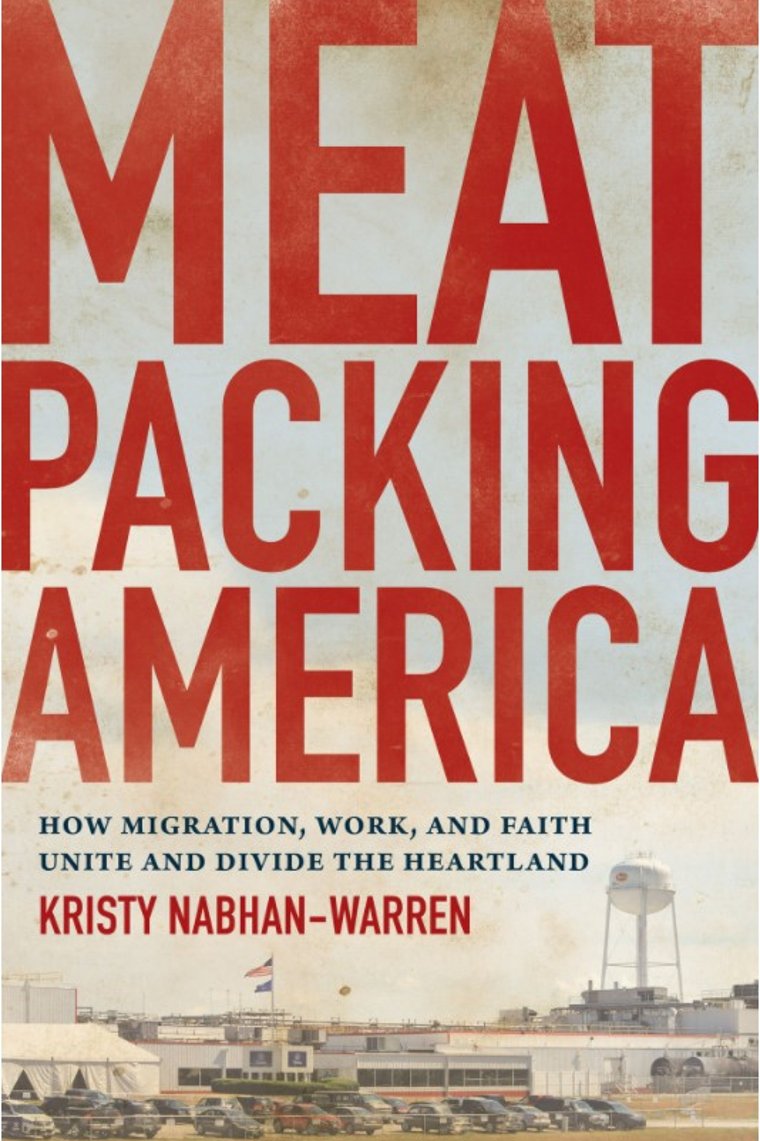 In the popular imagination, the small-town Midwest exists in a state of fixed, unchanging idyll, in which people who have always lived there and always will pass on to their children the rural values and traditions they themselves inherited. For some, often on the political right, these values are hard work, temperance of spirit and a genuine sense of community. This vision is frequently racialized, pitted as it is against notions of urban America as comparatively lazy, intemperate and incapable of sustaining community. Meanwhile for others, often on the political left, the unmistakably rural values in question are a stubborn resistance to change and a backwardness rooted in monolithic white Christian identity.

A key contribution of Kristy Nabhan-Warren’s new book is to critique both of these visions, simplistically deployed by the media, as insufficiently nuanced and ignorant of both recent and historic demographic change. As she emphasizes in Meatpacking America: How Migration, Work, and Faith Unite and Divide the Heartland (UNC Press), between 2000 and 2017 Iowa experienced a 131.2 percent increase in its number of Latino residents, who now constitute 6 percent of the state’s population (p. 51). This is not a massive number in isolation, but when talking about towns of a couple thousand people, the introduction of a small sliver of that 6 percent can have a significant impact on the makeup and life of the town.

Many of these new residents are migrants from Mexico, as well as the Northern Triangle states of Central America (Guatemala, Honduras and El Salvador). The Northern Triangle suffers from high rates of poverty and political and social violence, which are attributable in part to decades of violent U.S. intervention in the region. Because of this violence—and the explicitly stated motives of many of the migrants Nabhan-Warren movingly interviews—she considers all of them to be “de facto refugees” (p. xiii). They are joined by a smaller but growing number of legally recognized refugees from the Democratic Republic of Congo, Myanmar and elsewhere.

Many migrants to Iowa settle in small towns whose economies are based on meatpacking plants and slaughterhouses, like Columbus Junction, Tama and West Liberty. Jobs in meatpacking plants pay decently relative to cost-of-living (though not nearly as well as they used to, due to the movement of these plants since the 1980s away from unionized urban centers and towards rural right-to-work states). And the brutal, gruelling nature of the work makes the jobs undesirable to middle-class white residents. For these reasons, the settling of migrants in these towns and others has not just revitalized their economies. It has made them genuinely multicultural communities.

Nabhan-Warren, a professor of Religious Studies at the University of Iowa, documents the complicated and sometimes fraught flux of social and cultural life in and around Iowa meatpacking plants. She does so through hundreds of interviews with immigrant and native-born meatpacking workers and residents, animal agriculture CEOs and community religious leaders.

Meatpacking America’s most interesting and provocative moments are about this shared religiosity extending out of the church and into the workplace: into the meatpacking plants themselves. Tyson Foods, for example, now employs “more than 115 chaplains based in different factories around the country.” The chaplains are in-house spiritual advisors to the workers of both of the plants’ divisions, “hot” (slaughtering) and “cold” (post-slaughter processing) alike. She situates this peculiar fact within the broader context of the “Faith at Work” movement, which since the 1950s has striven for the synthesis of evangelical rhetoric about hard work and family values with the corporate-owned American workplace, as well as the freedom to express and practice one’s religious identity at work (p. 110).

Like so much of Nabhan-Warren’s commentary, her breakdown of this issue is deft and nuanced. On the one hand, a sincere respect for religious belief has led in at least some cases to genuinely inclusive workplace outcomes. This is true for the Somalian and Sudanese Muslim women workers at the Iowa Beef Packers plant in Tama, who “made a sacred space for themselves in the women’s locker room by sectioning off a small area in one corner of the entrance […] that can be closed to shield them as they pray to Allah” (p. 166).

On the other hand, the fusion of religious guidance with the profit motives of a physically and emotionally dangerous industry has, unsurprisingly, produced some troubling results. Nabhan-Warren includes a detailed profile of Joe Blay, a Ghana-born US citizen who serves as the chaplain at the Tyson plant in Columbus Junction. Joe comes across as thoughtful and affable, and seems to evince genuine concern for the Tyson employees in his pastoral care. And yet, despite these positive qualities, part of his job is to send out exhortations “warning” employees “to not be ‘lazy,’ as there are daily and weekly production goals” (p. 116). In a chilling and brilliant passage, Joe’s daily email to the plant workers includes this quote from the writer of Christian apologetics and Narnia author C.S. Lewis:

To love at all is to be vulnerable. Love anything and your heart will be wrung and possibly broken. If you want to make sure of keeping it intact you must give it to no one, not even an animal. Wrap it carefully round with hobbies and little luxuries; avoid all entanglements. Lock it up safe in the casket or coffin of your selfishness. But in that casket, safe, dark, motionless, airless, it will change. It will not be broken; it will become unbreakable, impenetrable, irredeemable. To love is to be vulnerable.

Lewis’s message, of course, is that although to love anything at all requires daring and risk; the alternative is a bleak, arid, ultimately false security. But in the context of an industry founded on the mass suffering and death of intelligent, emotionally complex animals, there is a dismal subtext to that phrase, “not even an animal”: do not look them in the eyes. Do not think too much about your work. Your heart will be wrung and possibly broken. Nabhan-Warren, a vegetarian of three decades, witnesses the slaughter of cows, with results comparable to this description. It is no coincidence, she argues, that most of the 115 Tyson chaplains are former chaplains for the U.S. military; nor that such bloody, debilitating labor is left to a constellation of our society’s most vulnerable.

Nabhan-Warren’s prose is clear and often absorbing. Unclogged with needless jargon and centered firmly on the fascinating lives of her subjects, it is easily readable for a general audience. Anyone interested in the intersection of migration, labor and animal agriculture — situating the American Midwest, one of the world’s major food providers, in the global context to which it properly belongs — will benefit from Meatpacking America.

This article was originally published in Little Village issue 299.