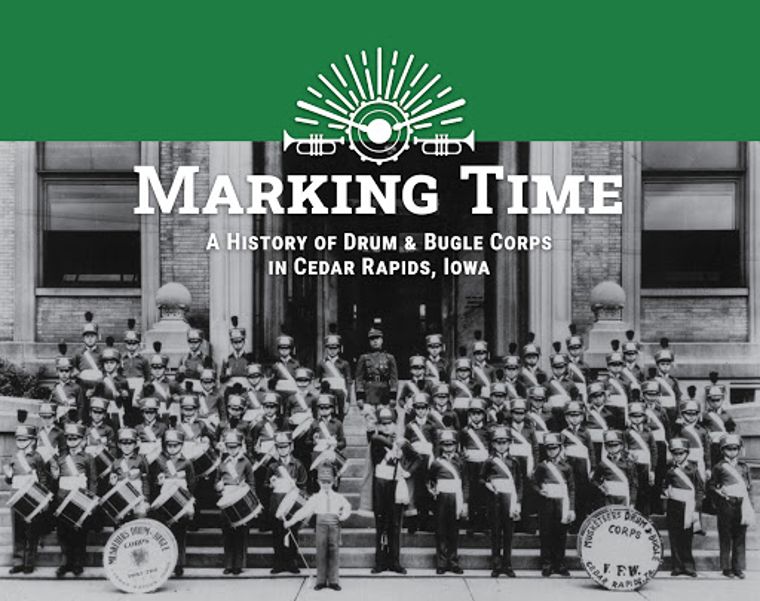 I remember with joy the first DCI (Drum Corps International) tournament that I attended. It was a DCI East Championship, I believe, in Allentown, Pennsylvania, sometime in the mi-1990s. I admired from afar, a huge fan of participating in marching band but, as a clarinetist, having no inroad to the drums, color guard or brass that make up a drum corps team. But as a spectator, I was hooked. And I was chuffed when I first moved to Cedar Rapids in the early 2000s and saw the Emerald Knights corps hall on 2nd Avenue (now the central fire station).

The pageantry and spectacle of a drum corps show is impossible to fully express if you haven’t experienced it. But a new spectacle of a book from the Iowa Music & Arts Association goes a long way toward making that impossibility a reality. Cindy Hadish, an alum of both Emerald Knights and Phantom Regiment (and recent Little Village contributor) is author on Marking Time: A History of Drum & Bugle Corps in Cedar Rapids, Iowa, a comprehensive look at the evolution of Cedar Rapids’ place in the world of drum corps.

Hadish dedicated countless hours of research to this exhaustive and deeply personal history. Her love of the subject matter can be felt throughout, and one imagines it would have been impossible for any writer less intimately connected to have drawn out the stories and memories of other alums in this book.

The book itself is a gorgeous piece. Designed by David Miessler-Kubanek of DMK Creative, LLC, it weaves together a treasure trove of esoterica — membership rosters, show programs, music books and more — with myriad photos gathered from the collections of past members of the many corps that have called Cedar Rapids home. At times, the space between the comprehensive captions and the text of the book is not as distinct as I’d have liked, visually. Dropping the font size a bit or using italics might have given the needed assist to the font difference (captions are in sans serif font; text is in serif). But that’s a minor distraction.

In her preface, Hadish writes of the book’s title, “’Marking time’ has special meaning to drum corps veterans, who understand it as terminology for marching in place, and in the case of this book, the term has added significance as we observe the passage of time.”

It’s a poignant thought, especially as the release of the book was twice delayed: once, when the 2020 Tournament of Drums was canceled due to COVID-19; again when the first plans for a distanced distribution were scuttled because of the derecho (the book was finally distributed on Aug. 29; it’s available now exclusively on the Association’s website). But it’s also incomplete. In addition to the physical act of marching and the observance of time’s passage, marking time in my marching band experience also served as a way to hold space — not just time passing, but a pause with the expectation of a new beginning. That’s how this book feels, also: not just the memory of the corps’ past, but holding space as we wait for the corps’ history in Cedar Rapids to begin again.

This article was originally published in Little Village issue 286.